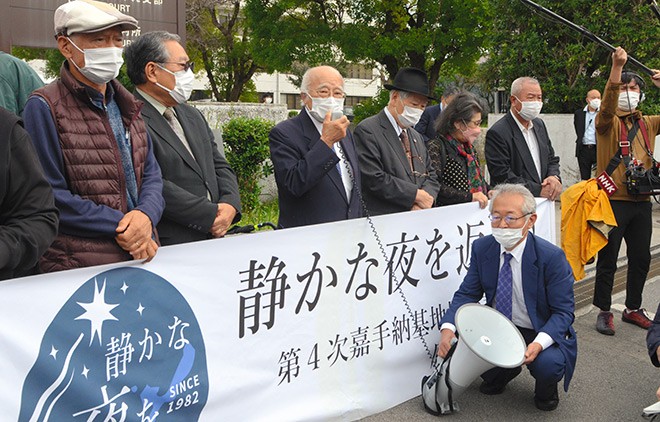 Plaintiffs seeking compensation for noise pollution from U.S. Kadena Air Base state their case on Jan. 28 in front of the Okinawa branch of the Naha District Court. (Shogo Mitsuzumi)

NAHA--In the largest lawsuit of its kind, more than 35,000 residents in Okinawa Prefecture announced Jan. 28 they are seeking 91.6 billion yen ($795 million) for deafening noise pollution from aircraft operating out of the U.S. Kadena Air Base.

It is the fourth lawsuit seeking compensation and an injunction on flights early in the morning and late at night.

In total, 35,566 residents in eight municipalities in the vicinity of Kadena base signed on as plaintiffs. They range in age from infants not yet 1 year old to a resident who is 106.

Kadena base is situated in the middle of a residential area.

The plaintiffs all live in areas where the weighted equivalent continuous perceived noise level was 75 decibels or higher, which over a prolonged period can cause hearing problems. The 75 decibel figure has been the cutoff point used by courts in past noise pollution lawsuits in determining if a plaintiff should be compensated.

The lawsuit calls for a ban on landings and takeoffs at Kadena between 7 p.m. and 7 a.m.

The number of plaintiffs and compensation amount awarded have all increased with each successive lawsuit.

No court has ordered an injunction on early morning and late-night flights on grounds the government is not in a position to control the activities of the U.S. military under the Japan-U.S. Security Treaty.

“It is our responsibility to take back the quiet night for the children who live near the base as well as for the younger generation who are the future of Okinawa,” Shusei Arakawa, 85, the head of the plaintiffs, said Jan. 28.

Miyuki Takayama, 47, a mother of two elementary school children, is one of the plaintiffs. She moved around 10 years ago to the central part of the main Okinawa island, where Kadena Air Base and the U.S. Marine Corps Air Station Futenma are located, from the southern part of the island.

She said that while she had been aware of the noise pollution problem, she never realized how debilitating the roar of jets taking off could be until she moved to her current abode. She said her children have been awakened at night by the sound of helicopters at Kadena and she has had to help them go back to sleep.