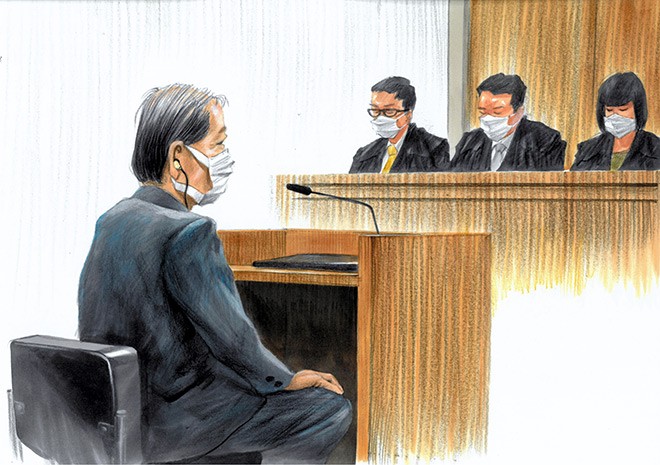 Takayoshi Yamaguchi listens to his sentence in the Tokyo District Court on Jan. 28. (Illustration by Kageyoshi Koyanagi)

The former chairman of a company that defrauded thousands of investors was handed an eight-year prison sentence on Jan. 28.

Although a multitude was taken in, Takayoshi Yamaguchi, 79, was found guilty of bilking around 160 million yen ($1.4 million) from 20 or so investors in a scheme that offered them ownership of magnetic medical products, which supposedly could be rented out for returns on the investments.

The company, Japan Life, said it would guarantee the principal amount and promised the investors annual dividends.

“Thinking nothing about the assets of its customers, the company tried to stay afloat (when it was in financial trouble),” said Presiding Judge Ryuta Asaka of the Tokyo District Court. “A long prison sentence is unavoidable considering the need for punishment held by the victims who lost savings they had intended to use in their retirement.”

According to lawyers for the victims, the crime for which Yamaguchi was indicted covers only about 1 percent of the total amount investors lost. Some ended up losing their entire life savings, with now almost no chance of them being able to recover the money.

The complexities of the case point to the difficulties facing prosecutors in winning a conviction in such circumstances.

In Yamaguchi’s case, he faced trial for ordering subordinates to continue finding new investors over a four-month period from about August 2017 even though he fully realized the company did not have funds to cover the dividends promised to potential investors.

The magnetic medical product scheme dates to around 2003.

The company declared bankruptcy in March 2018. Lawyers for the victims said about 7,000 individuals had been defrauded of about 210 billion yen.