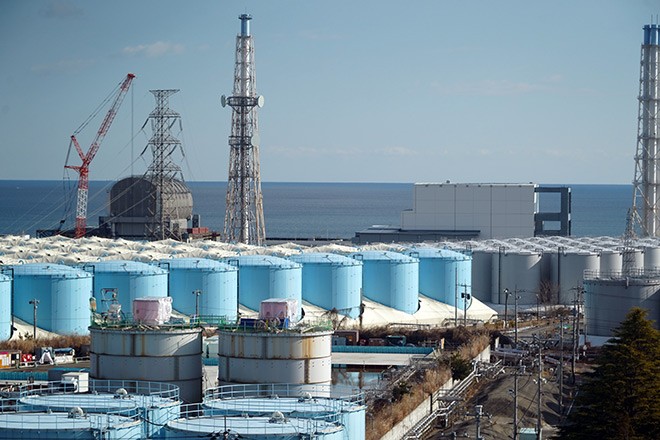 Rows of tanks holding contaminated water from the crippled Fukushima No. 1 nuclear plant on Jan. 17. The No. 3 reactor building is seen on the left and the No. 4 reactor building on the right. (Shigetaka Kodama)

Shovel loaders digging pits at the Fukushima No. 1 nuclear power plant on Jan. 17 were a rare sign of progress in the government’s contentious water-discharge plan at the stricken site.

Under the plan, millions of tons of treated but still contaminated water stored at the plant will be released into the sea over decades starting in spring 2023.

However, opposition to the plan remains fierce among local residents, the fishing industry and even overseas governments.

The pits being dug will temporarily hold radioactive water right before the release. But other preparatory work has already been stalled.

The government plans to create an undersea tunnel through which the treated and diluted radioactive water will be released into the sea about 1 kilometer from the plant.

Drilling work for the tunnel was initially scheduled to start early this year, but it was delayed to June.

Some government officials now doubt that the tunnel can be completed in time for the planned water release.

“It would be impossible to construct the underwater tunnel in less than a year,” one official said.

The government in April last year decided to discharge the contaminated water stored at the plant to move forward the decades-long process of decommissioning of the plant.

The accumulation of highly contaminated water has been a serious problem for the government and plant operator Tokyo Electric Power Co. since the Great East Japan Earthquake and tsunami in March 2011 caused the triple meltdown there.

An average of 150 tons of such water was produced each day last year as rainwater and groundwater keeps flowing into the damaged reactor buildings and mixing with water used to cool the melted nuclear fuel.

The contaminated water is treated by a multi-nuclide removal facility, known as ALPS, and stored in tanks. ALPS, however, cannot remove tritium, a beta-emitting radioactive isotope of hydrogen, and others.

The pits are being built to ensure that tritium levels in the treated water after dilution with a large amount of seawater are low enough to be sent to the planned tunnel for discharge into the sea.

Disposal of the contaminated water has become an urgent matter.

TEPCO said the existing 1,061 tanks at the plant are capable of holding a total of 1.37 million tons of water and would be full by around spring next year.

As of Jan. 20, the plant had reached 94 percent of capacity.

The government fears that continuing to add more storage tanks at the plant could jeopardize the overall decommissioning work.

The government asked the International Atomic Energy Agency to send an inspection team to examine the safety of the treated radioactive water.

A seal of approval from a credible international body could go a long way in easing domestic and international opposition about the water release plan.

The IAEA team of researchers from 11 countries, including China and South Korea, which are opposed to the water release, was expected to visit Japan in December to begin its on-site inspection.

But that trip was scrapped after a new wave of novel coronavirus infections hit the global community.

Government officials are negotiating with the IAEA for a visit in spring by the team. But it remains unclear when the trip will finally materialize.

The government and TEPCO have also made little progress in gaining support from fishermen and the public, despite holding numerous briefings about the water release plan.

Distrust of the government and the utility remain high in Fukushima Prefecture over their series of mishandling of the nuclear disaster.

Fishermen, in particular, are adamantly opposed to the release of the water into areas where they make their living.

“If you insist on the safety of treated water, why don’t you spray it in your garden or dump it in a river flowing into Tokyo Bay?” Toru Takahashi, a fisherman in Soma, asked government officials at a recent briefing session.

The officials brought with them a huge stack of documents to emphasize the safety of the treated water.

But they lowered their eyes and clammed up when Takahashi and other opponents challenged their view.

“I will never ever drop my opposition,” Takahashi said.

Such opposition has created a headache for leaders of the towns hosting the plant.

They are eager to see progress in the decommissioning work, and getting rid of the huge amount of contaminated water at the plant would be a big step toward rebuilding their affected communities.

After the government’s decision to release the water, Shiro Izawa, mayor of Futaba, a town that co-hosts the plant along with Okuma, called on then industry minister Hiroshi Kajiyama to gain support for the water discharge plan from the public and fisheries to advance the decommissioning process.

Futaba, a town with a population of nearly 7,000 before the nuclear disaster, is the only municipality in Fukushima Prefecture that remains entirely under an evacuation order.

In 2015, Futaba grudgingly became the storage site of contaminated soil and debris gathered in the cleanup of municipalities in the prefecture on the pretext of “moving forward rebuilding.”

If the planned water release is further delayed because of opposition from other municipalities, the future of rebuilding Futaba will remain in doubt.

(This story was compiled from reports by Takuro Yamano, Keitaro Fukuchi, Tsuyoshi Kawamura and Mamoru Nagaya.)