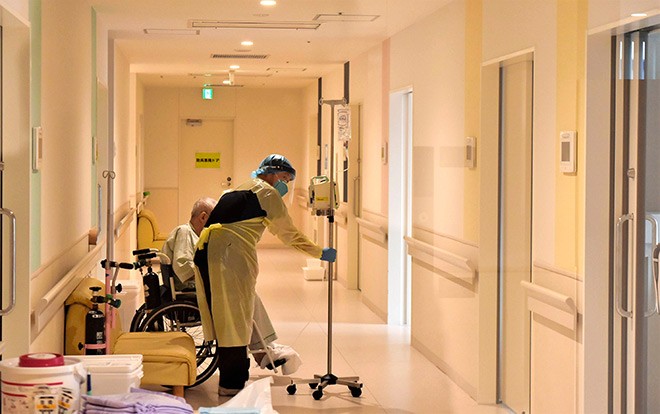 A staff member attends to a COVID-19 patient at Fujimino emergency hospital in Miyoshi, Saitama Prefecture, on Jan. 27. (Yoshinori Hayashi)

Health experts are raising alarms over the rapid increase in seniors infected with the Omicron strain, which has been described as “milder” than other variants but is still causing acute pneumonia among elderly patients.

In the current sixth wave of the pandemic in Japan, the novel coronavirus is increasingly spreading to elderly people, who are at greater risk of developing severe symptoms of COVID-19.

In the week until Jan. 25, about 36,000 people aged 60 or older contracted the virus nationwide, a 2.5-fold rise over the figure for the previous week.

The latest number also easily surpassed the record during the fifth wave, when around 10,000 people in that age group were infected over a week at the end of August 2021.

Doctors fear the elderly population could be in big trouble if the rate of infections continues rising at the same pace.

The center received nonstop calls from people asking about the test results and physician visits.

The hospital is a designated priority health care organization for COVID-19 patients with 38 beds, and is currently treating about 15 infected patients.

Initially in the sixth wave, many of the patients ranged in age from 20 to 49.

But now, many of them are 60 and older, and more than half of them have pneumonia and need ventilators.

“The hospitalized patients are increasingly older and develop severe symptoms,” Akira Kano, the hospital’s director, said. “Elderly patients have received vaccines twice, but that was a while ago, and they are becoming stricken with acute pneumonia.”

“The Omicron strain is said to be ‘attenuated,’ but that is far from the truth based on what I have seen on the ground,” Kano said.

He also said he has yet to see signs that the latest wave of new infections is fading.

“I have nothing but feelings of despair,” he said.

Chiba University Hospital in Chiba, which has taken in moderate and severe COVID-19 patients who need oxygen administration, has accepted an increasing number of elderly patients over the past several days.

“The current situation is showing signs similar to the ‘third wave’ when we required more nursing hands,” said Hidetoshi Igari, who heads the hospital’s division of control of infectious diseases.

Elderly patients short on physical strength also take a longer time to recover from COVID-19, and their hospital stays could be further prolonged if the virus aggravates a pre-existing condition.

One report said the risk of developing severe symptoms through the Omicron variant is about half the level for the Delta variant.

Proactive benefits from vaccines, such as preventing a patient from developing severe symptoms, are also expected.

In Okinawa Prefecture, where the Omicron variant spread earlier than in the rest of the country, 1.4 percent of infected people in their 40s and 50s developed moderate symptoms, according to data collected from Jan. 1 to 23 from the Miyako and Yaeyama health care zone in the prefecture.

If the number of people with severe symptoms continues to increase, health care services around the country could be overwhelmed.

According to the health ministry, 43,000 hospital beds for COVID-19 patients were secured around Japan as of Jan. 26, and 36,000 of them were available for immediate use.

However, the number of hospitalized COVID-19 patients has increased by more than 10,000 over the last two weeks, and 17,000 people have already been hospitalized.

Booster shots of COVID-19 vaccines are expected to increase the population’s effective defenses against the virus.

But only about 3.42 million people, including health care workers, had received a booster shot as of Jan. 28.

About 33 million elderly people are eligible to receive their third shots, but that extra defense will come after the sixth wave already caused daily new infections to reach record highs in various prefectures.

“As the virus spreads among elderly people, the number of deaths will slowly increase from now on,” said Kentaro Iwata, a professor of infectious diseases therapeutics at Kobe University.

“Meticulous measures are needed now, such as thoroughly implementing teleworking and not dining out with people outside of your household.”

(This article was written by Yoshinori Hayashi and Hiromi Kumai.)