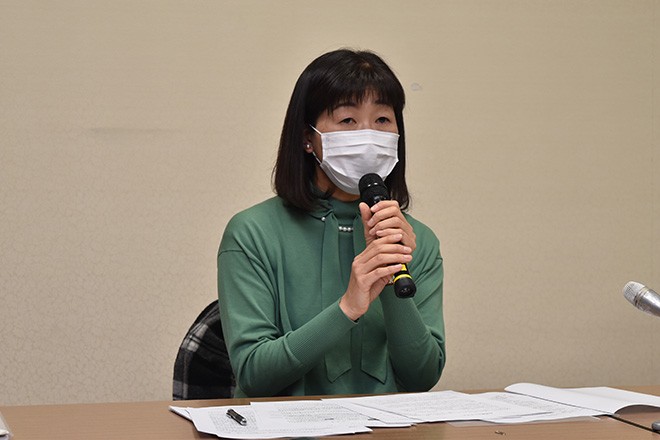 The widow of a Toyota Motor Corp. employee who killed himself over power harassment issues at work gives a news conference in Nagoya on Jan. 31 after reaching an out-of-court settlement with the company. (Haruka Ono)

Toyota Motor Corp. agreed to an out-of-court settlement with the family of a male employee who committed suicide in 2010 after developing depression due to repeated power harassment, the plaintiffs’ lawyer announced Jan. 31.

The man was 40 years old. His bereaved family was seeking about 120 million yen ($1.04 million) in damages.

His wife, now 50, and her attorney gave a news conference Jan. 31 to announce the terms of the Jan. 27 agreement under which Toyota agreed to pay settlement money, admit that her husband’s depression and suicide were due to overwork and power harassment from his boss and apologize.

“Every time I (met with Toyota executives) to negotiate a settlement, I was told that an investigative report had revealed that ‘everybody knew about it,’” the man’s wife said. “It was torment to accept the situation. I couldn’t stop crying. I even reached the point where I thought I didn’t want to hear another word about what went on.”

A Toyota representative, commenting Jan. 31 on the outcome of the case, said, “We are making efforts to develop an open corporate culture that allows our employees to work without anxiety. We need to continue to make such efforts without letup.”

The man joined Toyota as an engineer in 1990. He was in charge of making preparations for automobile production.

He developed depression around October 2009 and took his life the following January.

His bereaved family went to court in 2015 to gain official recognition that the cause of his depression and death was work-related.

The family lost its case at the Nagoya District Court, but the ruling was overturned by the higher court last September and later finalized. The high court ruling concluded the man had endured overbearing reprimands in front of other employees for nearly a year, which created a severe psychological burden.

The family filed a damage compensation lawsuit against Toyota in July 2020.

The family’s attorney revealed that last October Toyota proposed an out-of-court settlement. It led to the man’s widow having a face-to-face meeting with Toyota President Akio Toyoda.

Toyota admitted its responsibility and apologized. It also pledged to update the family over the next five years on its efforts to prevent a recurrence.

“If this lawsuit represents a chance for the company to change its working environment, my husband would forgive (what the company did to him) and appreciate (its efforts),” his widow said.