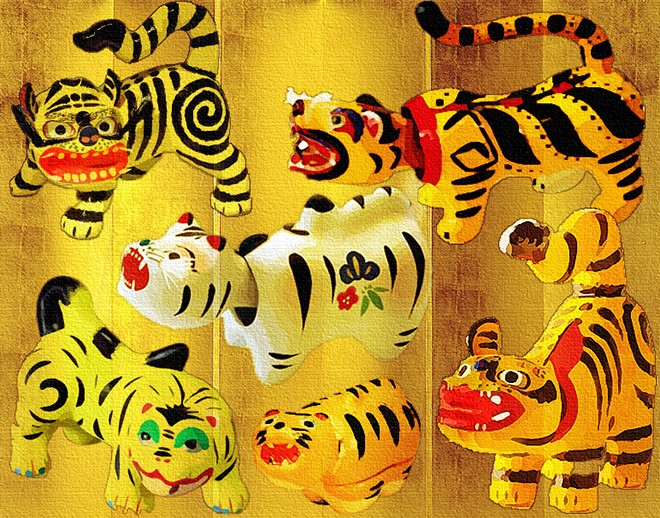 year of the tiger
I add to my dreams
another dream
--Eufemia Griffo (Settimo Milanese, Italy)

Sauntering
The fox and I pass
By this way
--Anne-Marie McHarg (London, England)

The haikuist learned that this year’s zodiac sign symbolizes a tiger crossing a river on Feb. 1. Patrick Sweeney suggested a revision.

On Feb. 3, Satoru Kanematsu dressed like an ogre and his grandchildren noisily tossed beans around the house and shouted out “Oni wa soto! Fuku wa uchi!” (“Demons out! Good fortune in!”) to scare away evil spirits. Marcellin Dallaire-Beaumont may have partied too hard in Brussels, Belgium.

Chinese New Year
I treat my headache
with tiger balm

Aaron Ozment celebrated the eve of spring all alone in Kagoshima. Following Setsubun festival rites, he silently chowed down uncut sushi while making a wish and facing north-northwest--the direction of good luck, which for him was toward Beijing.

The Winter Olympics opened in Beijing today, the first day of spring. Writing from Kunming, China, Chen Xiaoou recalled visiting a temple for the first time in the New Year. Danijela Grbelja was born in a year of the Tiger, 1974.

hatsumode
my mother dressed in
a new kimono

year of the tiger...
I look at myself
in the mirror

Julia Guzman received a New Year’s greeting card with a sketch of a water tiger in the mailbox out in front of her home near a river in Cordoba, Argentina. Nudurupati Nagasri pored over his mail in Hyderabad, India. Richa Sharma reread her own mail in Ghaziabad, India.

New Year
the same river…
yet not the same

new year fireworks
re-reading the mail
for the umpteenth time

the ball drops
another New Year alone
I kiss my cat

the bright colors
of a new diary
as bright as prayers

last month
of the old calendar...
the gloss of the new

long vigil
both the birds and I
await dawn

Ozment penned a poem that enthusiastically began: Waiting for cherries, Waiting for morning glories. His tanka continued with these three lines.

Marie Derley is waiting to see whether the annual tiger festival will take place later this month at Chogosonshiji temple high atop Mount Shigi in Nara Prefecture.

Shigisan’s tigers
do they roar or yawn--
another uncertain year

Mircea Moldovan brought gifts in both hands to an elderly soldier in Jibou, Romania.

With an eye on the year ahead, Masumi Orihara noted the importance of each and every step in her daily life. Lorelyn De la Cruz Arevalo reached the beach in Bombon, Philippines.

toes curled in the sand
moments travel
in waves

Dusting off
the dinosaur bones
at year’s end

winter vacation
the childhood board game
full of dust

Ignatius Fay let readers know that snow has piled knee-deep in Sudbury, Ontario, by referring to the Cree word “wapiti” for elk with white rumps. Worrying about the effects of climate change, Veronika Zora Novak paced back and forth in Toronto, Ontario. Moldovan tracked a hungry young wolf who left his pack to find a mate.

a wolf’s tracks
erased and rewritten…
dead of winter

lonely wolf
the purple ring
of an eclipse

McHarg invoked the Werewolf of London. Melanie Vance answered all her calls in Dallas, Texas. Mihovila Ceperic-Biljan changed the wallpaper on her mobile device in Rijeka, Croatia. Teiichi Suzuki wrote a sci-fi haiku to deride the overindulgence in technology that has led to “the estrangement of modern society.” In St. Louis Park Minnesota, Archie Carlos observed real life quietly disappear through a mobile phone and move to an online photo-sharing site.

loud growl
of a Bengal tiger—
ringtone for the new year

A smartphone--
tool of the lonely
winter birds

Vance left out food for a shy cat that reverted to living outside. Kanematsu pined for the Japanese wolf that was last seen in 1905.

I wait for
another feral cat…
first snow

Dining in in Tralee, Ireland, Noel King noted how customs officers have their work cut out for protecting endangered species this year. John Hamley composed his haiku in Brazil.

The repetition of a line is an attempt to emphasize its significance. Robert Major (1920-2008) repeated phrases in his own poem first published by Kodansha (1997) in “Haiku World,” edited by the late William J. Higginson.

Unsure of himself in Kota Mojokerto, Indonesia, Christopher Calvin repeated words and used parentheses to insert information in this haiku. The repetition of words is a literary device to make an idea clearer and to catch the reader’s eye.

Refika Dedic mediates on her sense of being in Bihac, Bosnia and Herzegovina.

In the front garden
blooming whitely
the camellia

When the Buddhist nun Jakucho Setouchi (1922-2021) passed away, Kanematsu penned this eulogy about constant change by describing a seemingly insignificant experience on Earth.

The next issue of the Asahi Haikuist Network appears Feb. 18. Readers are invited to send haiku about maple syrup on a postcard to David McMurray at the International University of Kagoshima, Sakanoue 8-34-1, Kagoshima, 891-0197, Japan, or e-mail to (mcmurray@fka.att.ne.jp).