Rallies staged in Japan on anniversary of Myanmar coup

Hundreds of Myanmar nationals living in Japan and their supporters gathered in front of the Foreign Ministry headquarters in Tokyo to mark the one-year anniversary of the military coup in the Southeast Asian nation. (Tetsuro Takehana) 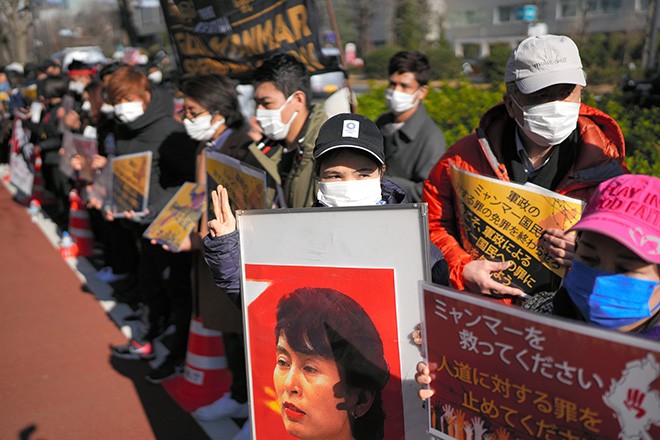 Myanmar nationals living in Japan call for support for people in their country at a protest held in front of the Foreign Ministry headquarters in Tokyo’s Chiyoda Ward on Feb. 1 to mark the one-year anniversary of the military coup. (Tetsuro Takehana)

Myanmar nationals living in Japan and their supporters staged rallies on Feb. 1 to mark the one-year anniversary of the military coup in the Southeast Asian nation.

In the afternoon, several hundred people, including company employees and students from Myanmar as well as their supporters, gathered in front of the Foreign Ministry headquarters and the Myanmar Embassy in Tokyo.

They chanted loudly in unison, “Stop the ODA to Myanmar!” while waving red flags of the National League for Democracy, a political party led by Aung San Suu Kyi.

ODA is official development assistance, or foreign aid given to developing countries to promote their development. Despite the takeover, the Japanese government has continued its existing aid programs to Myanmar and maintained its dialogue with the military.

The Japanese government stresses that it has “a unique connection” with Myanmar’s military, while refraining from launching a new aid program for the country.

Among the protesters at the Foreign Ministry headquarters was Pyae Lyan Aung, who was granted refugee status in Japan in August last year after coming to the country as a goalie with the Myanmar national soccer team. He refused to return to his homeland in protest against the coup.

“Young people are fighting the military in Myanmar," said Pyae Lyan Aung. "I want (people in Japan) to remember Myanmar and fight together.”

He added, “When I watch news reports about the protests in Myanmar, I feel jittery, thinking that I want to fight with them.”

He is now a member of the YSCC Yokohama futsal team in the F. League, and continues undertaking activities to pass on what is transpiring in Myanmar to Japanese students.

Although there are obstacles he is facing in Japan including the language barrier and financial difficulties, Pyae Lyan Aung said, “I don’t regret protesting against the military.”

Kiyoshi Ochiai, 59, director of the NPO organization Japan Myanmar Culture Center who has supported Pyae Lyan Aung, said, “People in Myanmar are struggling to make ends meet, with few job opportunities around. Young people cannot pursue their studies while feeling insecure about the future. They need support to live their lives.”

He said he regularly holds events asking for donations to send to Myanmar.