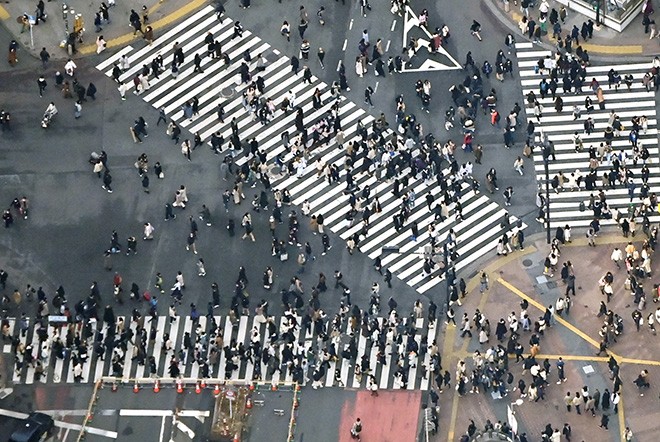 Pedestrians walk across the scramble crossing in Tokyo’s Shibuya Ward, an iconic landmark of the capital, on Dec. 25, 2021. (Kazuyoshi Sako)

Due to the COVID-19 pandemic and spread of teleworking, Tokyo experienced its first annual decline in population in 26 years in 2021, falling below 14 million, according to the metropolitan government.

The last time that Tokyo reported a decrease in population over one year was when it announced the number of its residents as of Jan. 1, 1996. Experts attribute the decline to COVID-19 and increased remote working, which allowed more employees to live outside the capital.

“Due to COVID-19, people continued moving out of the capital and foreigners returned to their countries," said Yutaka Okada, 54, a senior researcher at Mizuho Research & Technologies, an expert on population and local revitalization. "Also, living in Tokyo is not essential anymore because teleworking has been widely implemented.”

The new manner of remote working driven by the pandemic will likely continue to be embraced in the future. In addition, Japan can’t expect a surge in the number of foreigners moving in to the country, Okada said.

“It is possible that the capital’s population will keep decreasing gradually," he said. "Particularly in commuter towns located in the outer areas of the Yamanote Line, houses might be increasingly left vacant due to the population decline."

By comparison, in the 26 cities in the capital, the population grew by 2,089 in total, with Machida experiencing the largest increase of 1,233. The rise in the number of residents in other cities was 930 in Kokubunji, 789 in Koganei, 745 in Inagi and 547 in Tachikawa. In the capital’s towns and villages, the population decreased by 790 in total.

Tokyo metropolitan officials calculated the estimate based on the confirmed population figure of the capital as of Oct. 1, 2020, derived from the census conducted on the day, taking into account data on increases or decreases in the capital’s municipalities’ populations, taken from their basic resident registers.