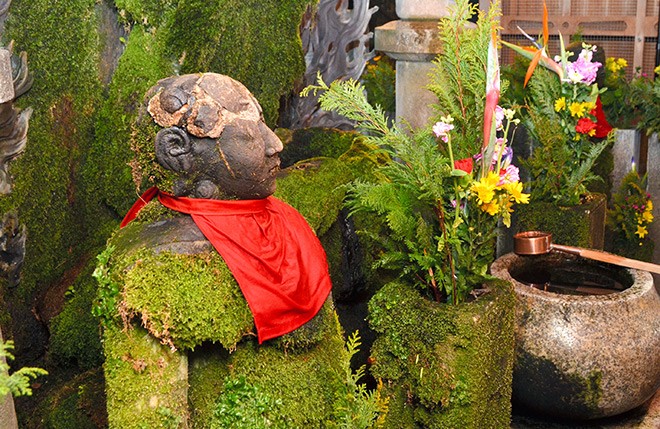 Moss was removed from the head portion of this stone statue. The photo was taken in Osaka on Feb. 3. (Kazuhiko Matsunaga)

OSAKA--Moss that has long covered the faces of two stone statues at Hozenji temple here and that has been cherished and nurtured by visitors was removed by a man who admitted to the action, sources said.

“It hurts me,” a temple staffer said of the defacing.

The temple, located in the city's bustling Minami area, is commonly known for its Mizukake Fudosan, where visitors have been pouring water onto stone statues for many years to grow the moss that completely covers them and then pray.

In late December, a visitor told a temple staffer, “I knew how those statues' faces appear for the first time.”

Subsequently, the temple discovered that the moss had been removed from the head portions of the Seitakadoji and Kongaradoji statues, located next to the Fudo Myoo statue.

A security camera set up inside the temple area showed a visitor apparently peeling off the moss with a ladle from the statues on the morning of Dec. 19, sources said.

After receiving a criminal complaint from the temple, the Minami Police Station in Osaka began investigating the case on suspicion of criminal damage and profaning a place of worship.

On Dec. 28, a man resembling the figure recorded by the security camera came to the temple, so temple staff contacted the police station.

The man apologized to police and the temple for removing the moss.

“A small amount of moss was peeled off, so I decided to clean those statues,” he reportedly said.

The temple then withdrew its complaint because the man apologized for his actions.

It is believed that the moss has been growing on the statues since soon after the end of World War II. Temple visitors pour water on the statues and then pray.

“How many years did it take for the moss to grow like that? How many people poured water onto them to pray for their wishes to come true?” said Shinei Kanda, the temple’s vice priest. “Never do that again.”