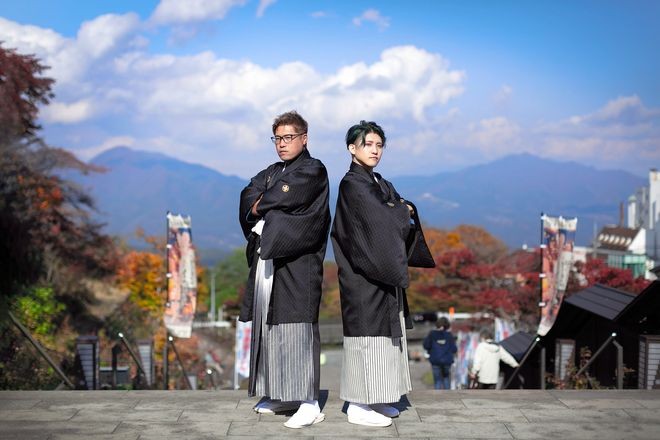 Hirohide Matsubara, left, and Kota Hoshino strike poses on a stone-paved road in crested “hakama” trousers for a photo shoot in November at the Ikaho onsen resort in Shibukawa, Gunma Prefecture. (Provided by Share Wedding)

Two men in crested “hakama” traditional trousers walked along a stone-paved street at the Ikaho onsen resort in Shibukawa, Gunma Prefecture, under a clear blue sky early in the afternoon.

“Lean more on each other. That's right. Very good,” a photographer directed, as he snapped photos of them.

Kota Hoshino, 31, and Hirohide Matsubara, 39, who reside in Takasaki, also in the prefecture, are a same-sex couple in their fifth year of dating.

As the pair found it difficult to make a long trip during the COVID-19 pandemic as they do every year, Hoshino and Matsubara set their hearts on having a lensman shoot wedding photos “in commemoration.”

The photo shoot in early November was provided by Share Wedding, a business in Takasaki that organizes marriage ceremonies and other events.

Though that form of marriage has yet to be made legal, LGBT (lesbian, gay, bisexual, transgender) individuals, along with providers of marriage ceremonies and wedding photo sessions for sexual minorities, expect those offerings to be accepted even more widely.

Share Wedding specializes in arranging packages in line with customers' requests and has even held a cosplay session for anime fans who wanted to snap pictures on local Mount Tanigawadake.

Acting on the belief that “a need must exist” as partnership mechanisms have spread among municipalities, Yasuyuki Sakurai, 46, president of Share Wedding, set up a dedicated consultation section for sexual minorities.

“My hope is that our special section will make customers feel like (using our services) when necessary,” said Sakurai, expressing his high expectations.

Hoshino and Matsubara said they decided to hold the photo session as showing other gay couples their photos may “give hesitant individuals an encouraging push on the back” to follow suit.

They said whereas many people wonder how gay people date, same-sex couples spend time with one another the same way as their opposite-gender counterparts.

Saimyoji temple in Kawagoe, Saitama Prefecture, in May 2020 began allowing LGBT couples to tie the knot there, after the municipal government put a partnership certification system in place.

In ceremonies for sexual minorities, priests hand over Buddhism rosaries representing LGBT in rainbow hues to the couples instead of marriage rings and oaths are made before a Buddhist altar.

Myokan Senda, 33, vice chief monk at Saimyoji, said sexual minorities are not discriminated against in Buddhism.

“The religion prays for the happiness of all living creatures in the world,” he said.

According to Senda, only two male couples have gotten hitched at Saimyoji as of Feb. 3 due to the novel coronavirus outbreak and other reasons, but some 50 inquiries have come from both in and outside Japan over the temple’s wedding service.

“I expect our wedding ritual to provide a good chance for all members of society to change their mindset,” Senda said.

“I want to render it common where LGBTQ people can hold marriage ceremonies at shrines,” said Kiyoshi Momoyama, 47, head priest of Negainomiya.

Mikawawan Resort Linx, a hotel in Nishio, Aichi Prefecture, made a non-religious service available for same-sex couples, when the city incorporated a certificate framework in September 2019.

Its wedding event is held at a guesthouse for only one couple per day, so LGBT individuals need not be worried about third parties watching them.

The Fukuoka Sunpalace hotel in Fukuoka’s Hakata Ward has omitted the name spaces for the “bride” and “bridegroom” in its wedding ceremony application form.

The accommodation facility works with a costume rental agency to offer various sizes of garments in the hope of enabling transgender people, whose physical genders do not match their emotional genders, to find suitable ones.

“Just like different-sex pairs, same-sex couples hope to stay close to their loved ones and see it as a pleasure to be celebrated by others,” said Reiko Shiraishi, a freelance wedding planner who serves as a marriage event adviser to the hotel. “I would like patrons to enjoy rituals and receptions designed especially to make clear their ties with their sweethearts.”

The same-sex partnership certificate mechanisms were first introduced in Japan by Tokyo’s Shibuya and Setagaya wards in 2015.

According to data from an LGBT group called Jichitai ni Partnership Seido o Motomeru Kai (The organization to call on municipalities to install partnership systems), 147 local governments have put that certification in place by Jan. 4 this year, covering more than 40 percent of all residents nationwide.

Support is offered for marriage ceremonies and wedding photo sessions for LGBT couples in a gradually growing number of cases. But Hisana Mamada, who heads Hareruwa, a support group for sexual minorities in Gunma Prefecture, said that is not enough.

“Few services are still accessible in particular in local areas where support from minorities’ groups can rarely be found,” said Mamada.

As sexual minority couples often hesitate to ask wedding halls and other operators whether they can hold ceremonies there out of fear of being “subjected to offensive words,” Hareruwa organizes training programs for businesses to become more open-minded.

“It will be ideal if same-sex couples can freely choose venues where they would like to have their wedding ceremonies, instead of having to select from among a limited number of sites available,” Mamada said.