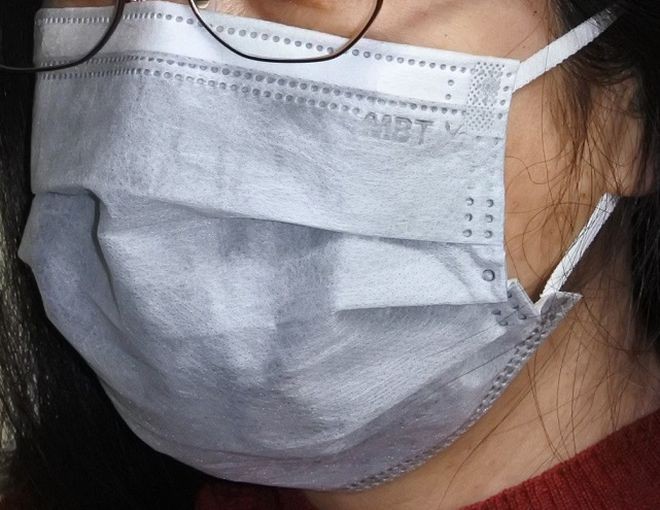 A newly developed nonwoven mask, carrying the MBT Consortium logo in the corner, offers the wearer a better fit to ensure its medical effectiveness. (Makoto Ito)

A medical university and a coating technology company have teamed to produce a nonwoven mask specially treated with a copper alloy to protect wearers from the novel coronavirus.

“We expect our product to be used by ordinary consumers, including those who cannot be vaccinated for some reason, as well as medical workers,” said Kazumi Iwamoto, 42, a senior managing director at Yamato Shinku-Kougyo in Kashiba, Nara Prefecture.

Recognized as meeting the Japanese Industrial Standards (JIS) for use as a surgical mask, the brainchild with an exceptional antivirus performance hit the market on Feb. 1.

In June last year, the university’s Department of Microbiology and Infectious Diseases proposed that Yamato Shinku-Kougyo develop a product based on a copper alloy that can lower viruses’ infectivity.

Yamato Shinku-Kougyo is a member of the MBT Consortium, which was created with the goal of contributing to society through medical programs by working with Nara Medical University.

The company decided to make a high-performance nonwoven mask, as Yamato Shinku-Kougyo had developed and released an anti-virus facial covering since autumn 2020.

In creating the latest four-tier mask, Yamato Shinku-Kougyo sprayed an alloy fashioned primarily from copper on the second layer from the surface to form a thin membrane through a specialized process called vapor deposition.

According to Ryuichi Nakano, 46, an associate professor of microbiology at the university department, copper ions are known to be able to damage the new coronavirus.

When the alloy-based facial protection was completed following much trial and error, Nakano tested the product against the Delta variant of the virus cultured by himself and others.

The results showed the virus decreased to one millionth the initial amount in two minutes. To Nakano's surprise, the virus variant was rendered inactive so much that it fell below detectable levels.

“I did not predict so high an antivirus effect would be reported,” said Nakano. “The same effect will likely be confirmed (on the Omicron variant) as well, so we will carry out a test.”

Last fall, the copper-treated mask was confirmed to be able to catch and filter out minute particles and virus-tainted droplets in the JIS screening. It was also revealed that the gear can act as an excellent barrier against artificial blood.

Such performance indexes for the product are reportedly as high as those of surgical masks.

It was flooded with more than 3,000 pre-orders for a total of 100,000 or so masks before starting sales, according to Yamato Shinku-Kougyo.

The company is planning to pitch a smaller mask for use by children.