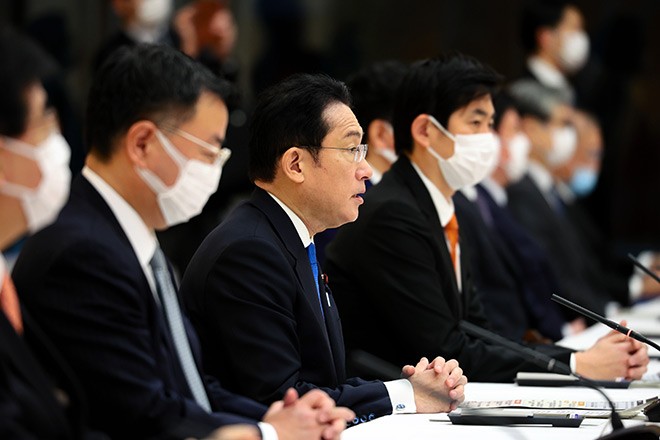 Prime Minister Fumio Kishida, third from left, speaks at a meeting on the promotion of the nation’s economic security on Feb. 4. (Koichi Ueda)

Businesses and private sector researchers could face up to a two-year prison term if they leak sensitive technologies and undermine safeguards against cyberattacks, according to the draft of the economic security bill, sources said.

But business circles and Komeito, a junior partner of the ruling coalition, have expressed concerns about the government's increased oversight powers granted under the legislation.

The bill may be revised before the government submits it to the Diet this month, depending on their feedback.

The bill is aimed at boosting Japan’s economic security, which is one of Prime Minister Fumio Kishida's key policies.

The legislation, with 98 provisions, comes with four pillars: strengthening supply chains for key materials and parts; government oversight in installation of vital equipment and computer systems in core infrastructure; encouraging research and technological cooperation between the private and public sectors; and securing sensitive technological information in patents.

As for core infrastructure, the government will review such projects to ensure that foreign products are not used in vital equipment to reduce the risk of cyberattacks.

As for broadcasting, public broadcaster Japan Broadcasting Corp., as well as other TV networks, which fall under the Broadcasting Law, will be subject to the government review, according to the sources.

When businesses in those industries introduce crucial systems, they must submit documents listing such details as the outline, parts and components, and the entities that will maintain and manage the systems, to the respective state ministers.

If businesses fail to submit the detailed documents or submit faulty documents, the individuals involved could face a “prison term of up to two years or a fine of up to 1 million yen ($8,670).”

The same penalty will be imposed on those who refuse to comply with a government order despite receiving an earlier warning.

To shore up supply chains, items essential to daily lives and economic activities will be prioritized as vital materials and products by Cabinet order. Semiconductors, pharmaceuticals, rare earth metals and large-capacity batteries will likely fall in this category, the sources said.

Under the legislation, the government can ask companies importing and selling those products to report on their procurement and storage situations.

If companies refuse, citing “corporate secrets” or other reasons, they could be hit with a fine of up to 300,000 yen.

As for patents involving the development of sensitive technologies, including nuclear energy and weapons, the content of the patents must not be disclosed, according to the bill.

Businesses would face a “penalty of up to a one-year prison term or a fine of 500,000 yen” if they file patent applications with foreign governments.

A panel of experts advising the government on the bill was divided over the penalty.

Some members expressed caution as it could anger the nation's business community.

But others underlined the need to impose a “strict penalty” to ensure the effectiveness of the legislation.

1: Strengthening of the supply chain

・Businesses do not comply with reporting or submitting documents to the government.

・Businesses do not submit project plans or submit faulty documents

・Businesses do not comply with government order

3: Collaboration between the public and private sectors over sensitive technologies

・Leak of patent information that is not publicly disclosed