EDITORIAL: China risks a deeper rift with its Olympic diplomacy 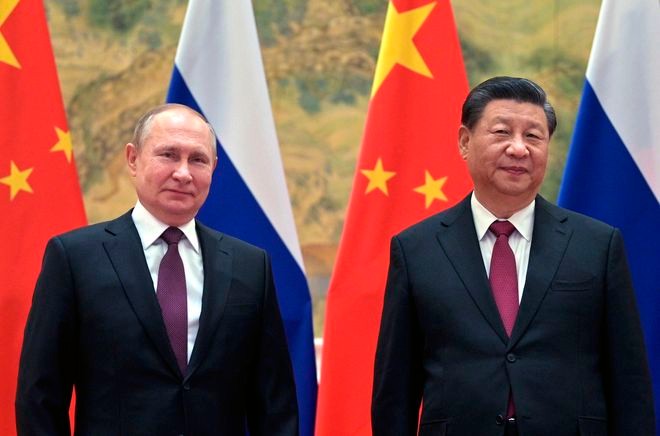 Chinese President Xi Jinping and Russian President Vladimir Putin pose for a photo prior to their talks in Beijing on Feb. 4. (Sputnik, Kremlin Pool Photo via AP)

With the 2022 Winter Olympics now in full swing, Beijing is in the global spotlight over the high-stakes game of diplomacy that is being played out. China reportedly rolled out the red carpet for foreign leaders who paid courtesy visits.

The United States and Britain are among countries that opted to “boycott” the Games by not sending senior government officials to Beijing in protest against China’s human rights record. The Chinese government was keen to underscore its cooperation with friendly nations.

It is a matter of deep regret that the Olympics, which are supposed to be a celebration of peace, have become a stage for diplomatic grandstanding that highlights divisions stemming from confrontation between Beijing and Washington. The “politicization” of the Olympics runs counter to the ideals behind the international sporting event.

The international community is deeply worried about Moscow’s massive deployment of troops to areas along the border with Ukraine. Amid mounting tensions over fears of possible military conflict, China ventured to show its support for Russia.

However, China called for a truce in armed conflicts around the world during the Games in support of a U.N. resolution urging observance of the Olympic Truce for Beijing 2022.

Beijing should have urged Putin to refrain from any reckless military action, thereby demonstrating its commitment to maintaining peace. Beijing is playing a dangerous diplomatic game if its intention is to place priority on the political goal of sending a warning to the United States, a sentiment shared by Moscow.

Xi also met with Kassym-Jomart Tokayev, the president of Kazakhstan, where scores of citizens were killed or injured in mass unrest last month. During the meeting, Xi expressed support for the Kazakh government’s response to the rioting without voicing any concern about the brutal crackdown from a humanitarian viewpoint.

About 25 nations sent high-ranking officials to China for the Winter Games, less than half the figure for the Beijing Summer Games in 2008. This may have made Beijing all the more eager to reward the nations that showed respect for China with such a diplomatic gesture.

China no doubt blames the United States for the rift. China and a number of other countries were excluded from the Summit for Democracy, organized by U.S. President Joe Biden last year.

Even if China has a point, a strong case can be made for confronting human rights problems in China, which has been criticized not only by leaders of Western democracies but also by many international organizations and civil activists.

One of the final torchbearers in the Opening Ceremony was a Uighur athlete. But this blatant piece of theater instead underscored the deep-rooted nature of the issue. The choice of an ethnic Uighur to carry the Olympic torch did nothing to clarify allegations of serious human rights abuses against Uighurs, a predominantly Muslim ethnic minority in the western Chinese region of Xinjiang.

Before the start of the Olympics, the Chinese government showed a willingness to allow the U.N. high commissioner for human rights to visit Xinjiang. In his meeting with Xi, U.N. Secretary-General Antonio Guterres expressed his hope that Beijing would allow U.N. human rights chief Michelle Bachelet to make a “credible visit” to Xinjiang. But Chinese authorities made no mention of this.

China has adopted the slogan of “Together for a Shared Future” for the Winter Games. But the future will be bleak if the value of human rights and freedom is not shared widely.

The Chinese government should respond squarely to the grave questions posed by the international community.