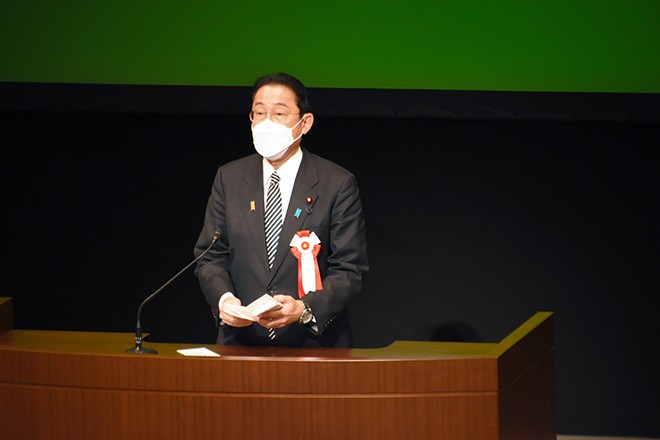 Prime Minister Fumio Kishida gives a speech at an annual rally to call for the return of the Northern Territories in Tokyo on Feb. 7. (Taishi Sasayama)

Prime Minister Fumio Kishida vowed to tenaciously negotiate with Russia for the return of the Northern Territories, but Moscow appears preoccupied with other matters at the moment.

Kishida, at a national rally in Tokyo on Feb. 7, said he would continue with former Prime Minister Shinzo Abe’s policy of seeking the return of two of the four islands off Hokkaido that were seized by Soviet troops at the end of World War II.

But the Ukraine issue has not only dashed hopes for an early resumption of Japan-Russia talks on the Northern Territories, it also puts Tokyo in a tight spot between Washington and Moscow.

In an online meeting with U.S. President Joe Biden in January, Kishida confirmed that Japan would cooperate with the United States if an emergency situation arises in Ukraine.

Kishida said Tokyo would continue its close coordination with Washington and other allies and partners, as well as the international community, if Russia were to invade Ukraine.

A senior official from the Foreign Ministry said a Russian military attack against Ukraine would result in G-7 nations acting together on such measures as imposing economic sanctions against Russia.

However, at a news conference at the Foreign Correspondents’ Club of Japan in Tokyo on Feb. 2, Mikhail Galuzin, Russian ambassador to Japan, warned Tokyo against going along with Western nations in slapping sanctions on Russia.

“(It would) contradict the spirit of good neighborly or Russian-Japanese relations,” he said.

One source close to the prime minister’s office also expressed concerns, saying, “If sanctions are imposed on Russia, natural gas will not come from Russia to Japan, and crude oil prices will rise.”

Although Lower House Budget Committee meetings are still in session, Kishida managed to find time to rush to the “national conference to call for the return of the Northern Territories” on Feb. 7.

“Under the policy to resolve the territorial issue and strike a peace deal, and based on various agreements made so far, including the one at the 2018 Japan-Russia summit in Singapore, I will take over the exchanges that have been held between the leaders (of Japan and Russia) since 2018,” Kishida said at the rally, reading from a paper.

At the November 2018 summit in Singapore, Abe and Russian President Vladimir Putin agreed to speed up negotiations for a peace treaty based on the 1956 Joint Declaration, under which the Soviet Union said it would hand over Shikotan Island and the Habomai group of islets after a peace treaty has been signed.

That agreement was seen as a shift in Japanese policy from seeking the return of all four northern islands to just two of them.

At the Feb. 7 rally, Kishida repeated an expression that he used in phone talks with Putin in October last year as well as in his policy speech in January. That expression indicated that he would continue with Abe’s policy stance on the Northern Territories issue.

However, a former Cabinet minister expressed dissatisfaction, saying, “Because the 2018 agreement between Abe and Putin was a significant diplomatic failure, it’s wrong for Kishida to not explain why he is just taking it over.”

(This article was written by Ryo Aibara and Ryutaro Abe.)