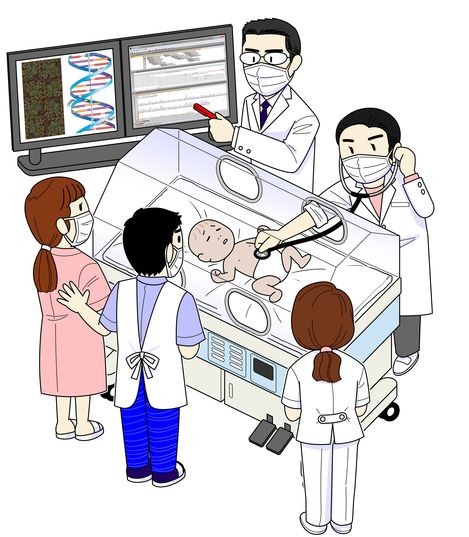 This image for illustration purposes shows how the cause of an infant’s symptoms can be identified via genome analysis for more effective treatment. (Provided by Keio University)

Japanese researchers said they pinpointed the causes of previously undetected diseases among small children through genome analysis in half of the cases they examined.

Team members, primarily from Keio University in Tokyo, said courses of testing and therapy improved in half of the cause-identified instances. Looking into the complete set of genes proved to be the key for correct diagnoses and treatment of newborns suffering from serious disorders, they added.

“We want to help protect infants, who are in the most vulnerable position in society, through the latest technological advances in genome analysis,” said Toshiki Takenouchi, a full-time lecturer of pediatrics at Keio University, who is a member of the team.

The findings showed that 41 of the newborns suffered from a hereditary condition. While humankind’s genetic code in DNA consists of 3 billion base pairs represented by the letters A, T, G and C, only one or two of the characters were replaced to result in the onset of symptoms in most cases.

The genetic anomalies not only emanated from the parents themselves but also emerged in the newborns via mutations in many instances, team members said.

Genome analysis saved 20 of the 41 children the ordeal of undergoing onerous biopsies that collect muscle or skin samples for analysis. This also led to more effective therapeutic methods, including the use of drugs more suited to eliminating individual health problems.

The research findings were published in the specialized pediatrics magazine Journal of Pediatrics at (https://www.jpeds.com/article/S0022-3476(22)00064-6/fulltext).