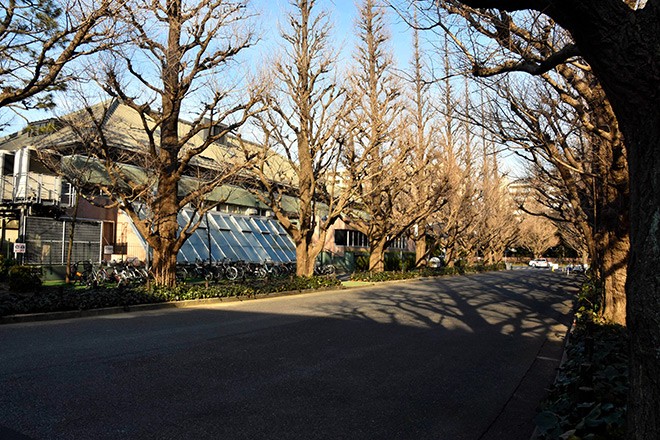 Nearly 1,000 trees are at risk of being felled in a rare oasis of greenery in central Tokyo to make way for redevelopment under plans approved Feb. 9 by the metropolitan government.

The leafy Meiji Jingu Gaien area so popular with Tokyoites stands to lose as much as 70 percent of its greenery, including 971 trees.

The Japan ICOMOS National Committee, an advisory body of the United Nations Educational, Scientific and Cultural Organization (UNESCO), has called for an urgent overhaul of the project. Even so, it got the green light Feb. 9 from the metropolitan government’s urban planning council.

Leading real estate developer Mitsui Fudosan Co., along with the trading house Itochu Corp., Meiji Jingu shrine and the Japan Sport Council, are expected to carry out a survey to decide whether to fell the trees or transport them for replanting elsewhere.

The redevelopment site covers about 66 hectares in the capital’s Shinjuku, Shibuya and Minato wards.

However, the developers pledged to preserve a famous gingko tree lined avenue that stretches from Aoyama-dori Street to the Meiji Memorial Picture Gallery.

Under the plan, Meiji Jingu Stadium and Chichibunomiya Rugby Stadium will be torn down and their locations switched in a phased manner.

The redevelopment project is expected to be complete in 2036.

According to a draft of an environmental assessment the developers submitted to the metropolitan government, a survey on plants and trees--such as zelkova, camphora and gingko--found that there are 1,114 healthy trees and 267 that have deteriorated.

For the moment, the developers plan to preserve 340 trees, transplant 70 and cut down 971. However, plans remain fluid and a final decision on the fate of the trees will come later.

“We will seek advice from tree doctors and preserve as many trees as possible to create a green area,” said the Mitsui Fudosan representative handling the project. “We have taken note of calls to rethink the project and will discuss the matter with the metropolitan government.”

The Gaien area was the first in Japan to be designated as a nature preservation area to maintain the natural landscape.

The Japan ICOMOS National Committee, which is comprised of experts and groups working to preserve cultural assets, has argued that redevelopment plan should be overhauled.

“The area is part of Japan’s cultural heritage that is held in high regard in the international community,” it said. “The natural greenery has huge importance for the public and it serves the public interest.”

It called on the metropolitan government “to inherit the site, not destroy it.”

Mikiko Ishikawa, a professor of urban environment planning at Chuo University who is a board member of the committee, said she inspected the trees one by one in January based on the redevelopment plan.

“There are many large trees that are old,” she said. “This is not something to be decided quickly. It should be discussed over time.”

The metropolitan government said it would give priority to transplanting trees rather than felling them if possible while paying “attention to the way the project is taking shape.”