Mixed-gender bathing at risk due to lecherous ‘crocodile’ men

Men and women bathe together in “bathing garments” at the Sukayu Onsen hot spring resort in Aomori in November during an experiment to maintain traditional mixed-gender bathing. (Video by Akina Nishi) 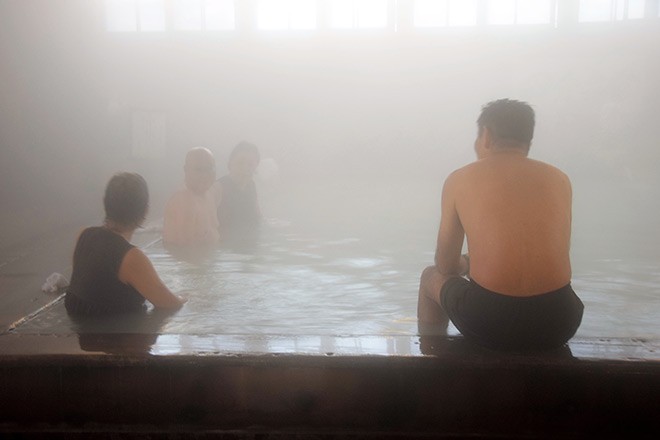 Male and female tourists in bathing garments are seen together in the Hiba Sennin Buro mixed bath at the Sukayu Onsen hot spring resort in Aomori in November. (Akina Nishi)

AOMORI--A government project is under way to keep afloat the Japanese tradition of mixed-gender bathing, which is becoming less common due to an increase in male bathers who show up only to ogle women.

The northern Tohoku region is home to renowned hot spring resorts, many of which offer baths where men and women bathe together.

But some fear the age-old practice might eventually be lost to history if women continue to feel uncomfortable with mixed bathing.

“Mixed bathing is a key component of spa therapy culture,” he said. “We hope to work hard so more people will come to believe that the practice needs to be kept alive.”

In November, project organizers conducted an experiment where they had men and women bathe together in “bathing garments”--shorts for men and a sleeveless one-piece suit and pants for women--at the Sukayu Onsen hot spring resort in Aomori.

The 260-square-meter Hiba Sennin Buro (1,000-person cypress bath) at Sukayu Onsen, which lies at the western foot of the Hakkoda mountain range, maintains separate timeslots for mixed bathing and for women-only bathing.

But a recent survey found that few women bathe during the times set aside for both men and women.

A woman in her 60s from Tokyo’s Adachi Ward came across a fellow traveler on the same tour--a man in his 60s from Kamakura, Kanagawa Prefecture--in the cypress bath during the experiment. She said they would not have connected otherwise.

“I would have preferred to bathe naked, but then I wouldn’t have dared to talk to a man face to face had I not been in a bathing suit,” the woman said with a laugh.

Sukayu Onsen lies in Towada-Hachimantai National Park, which straddles the three prefectures of Aomori, Iwate and Akita. The national park is home to 14 long-established hot spring inns for recuperation, many of which offer mixed bathing.

Officials with the Tohoku Regional Environmental Office said mixed baths in the northern Tohoku region have a “high historical and cultural value” because laws and regulations, including the Hotel Business Law, effectively prohibit businesses from creating new ones.

No official statistics are available on the number of mixed baths, but hot spring expert Kyoko Kitade said mixed bathing was practiced at only about 500 hot spring inns and communal baths across Japan in 2021, down from 1,200 or so in 1993.

Many hot spring inns have ended the practice partly because of the emergence of male bathers who eagerly await women and fix a lecherous gaze upon them.

Such men are called “crocodiles” in spa industry jargon because they look like crocodiles hiding in the water and staring at their prey.

Sukayu Onsen has not been spared from the nuisance of “crocodiles” and is taking preventive measures of its own, such as designating separate bathing sections for men and women.

The Tohoku Regional Environmental Office surveyed visitors at the hot spring resort during the experiment period. About 300 men and women responded.

Seventy-five percent of the female respondents said they feel put off by mixed bathing, but 81 percent said they no longer felt uncomfortable when they were in a bathing suit.

Nearly 80 percent of both male and female respondents said they want a bathing suit to be made available in the future.

Not everyone is on board with the idea, however.

Kazushi Sato, 74, chairman of the Tsurunoyu Onsen inn in Senboku, Akita Prefecture, said he believes that a bathing suit has no place at a hot spring resort.

“I hope the characteristic traits of individual hot springs will be respected as a way to preserve Japanese culture,” he said.

A barrier extends from a women’s indoor bathroom into a mixed bath in the open air, allowing female bathers to soak up to the shoulders in the milky-white bathwater without being exposed to the prying eyes of men who are there.

Sadakazu Takada, 65, president of the Osawa Onsen inn in Hanamaki, Iwate Prefecture, said he plans to maintain the tradition of mixed bathing as a hot spring inn where visitors have stayed for therapeutic purposes.

The inn, known as a favorite of famed poet Kenji Miyazawa (1896-1933), features a mixed open-air bath that extends out to a river and is visible from the opposite riverbank.

“Manners have seldom been broken here because the bath is in plain sight from the outside,” Takada said.

He said the inn is giving consideration to female visitors by designating timeslots where only women can bathe and through other measures.

The inn, located at the Matsukawa Onsen hot spring resort at the foot of Mount Iwatesan, also has a mixed open-air bath popular with visitors.

Takahashi said she once decided to close it when issues were raised at other hot spring resorts over breaches of manners.

Takahashi changed her mind and chose to continue the practice, not the least because some couples said they wished to continue bathing together.

“I always tell myself that I will have to end the practice if anything goes awry,” she said.