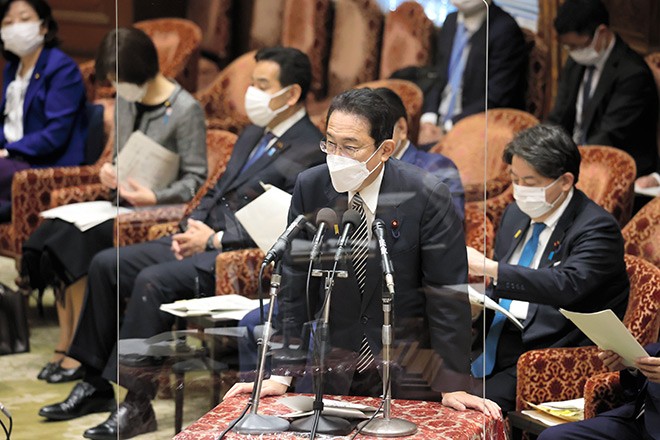 Prime Minister Fumio Kishida’s habit of giving vague answers to questions in the Diet has earned him the nickname “Mr. Consideration” by at least one frustrated opposition party lawmaker.

For many of the questions, Kishida has simply replied “I will consider it.”

But what also rankles opposition lawmakers is that Kishida is quite capable of giving specific replies—when the questions are asked by members of his Liberal Democratic Party.

The Lower House is currently discussing the budget bill for next fiscal year, but Kishida has also been asked to explain other policies, including the government’s measures to counter the COVID-19 pandemic.

At the Lower House Budget Committee meeting on Feb. 7, an LDP lawmaker asked Kishida about the COVID-19 vaccine program: “Shouldn’t we set a goal for booster shots?”

The prime minister replied straightforwardly: “We would like to strengthen our efforts to achieve a million booster shots per day as early as possible in February.”

When the same question was asked by a lawmaker of the main opposition Constitutional Democratic Party of Japan on Jan. 25, Kishida declined to give an answer.

The reluctance to announce a booster shot goal continued in the Diet, with Kishida simply repeating the required time needed between the second and third vaccine shots.

At the Feb. 2 Lower House Budget Committee meeting, Kishida said, in response to a question from a CDP lawmaker, “(Setting a goal) is not realistic.”

Even an LDP member who used to be a Cabinet minister said: “He should have said so much earlier. Why couldn’t he do so?”

When a CDP lawmaker pressed Kishida to accelerate booster efforts at mass vaccination centers operated by the Self-Defense Forces, Kishida answered, “I would like to consider expanding the efforts there, depending on the situation.”

Two days later, when questioned by an LDP lawmaker, Kishida announced a specific policy: “I would like to expand the program to 5,000 shots per day (at the Tokyo venue).”

Kishida has continued to avoid giving clear responses in the Diet since he became prime minister in October.

He has also responded with “I would like to or must think” about something at least 59 times.

These vague replies accounted for about 30 percent of his responses.

In the last extraordinary Diet session, over about 33 hours in budget committee meetings, Kishida said he would like to “consider” or “think about” something in 30 percent of his answers to lawmakers’ questions.

Kenta Izumi, head of the CDP, criticized Kishida at the party’s meeting on Feb. 7, saying, “His leadership is so weak.”

“His tactic of consistently giving vague answers is too awful,” a senior CDP lawmaker in charge of Diet affairs said. “That’s why the approval rating for his Cabinet has started to drop.”