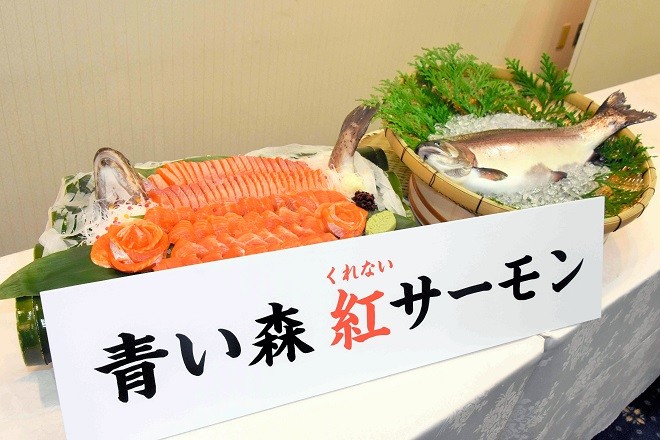 Salmon farming has spread so rapidly in Aomori and Iwate prefectures that the fierce competition between brands is at times likened to the “regional wars” in the feudal era.

Japanese consumers had previously had to rely on imports mainly from Northern Europe and Chile to find salmon on their tables.

Farmed salmon is now said to be more popular than tuna at conveyor belt sushi restaurants.

Unlike large-scale farming businesses by major corporations, salmon cultivation in those areas are often led by local fishermen and municipalities.

Among the growing brand names are Iwate Prefecture’s Kohaku Salmon and the Aoimori Kurenai Salmon and Kaikyo Salmon brands from Aomori Prefecture.

Boasting reduced fat but a strong flavor and a slightly sweet taste, Aoimori Kurenai Salmon was developed in a freshwater environment by the inland water research division of the Aomori Prefectural Industrial Technology Research Center (AITC) in Towada.

The AITC has been creating “a salmon variety grown in and unique to Aomori” for around 16 years.

Garlic, a local specialty of Aomori, was initially given as food, but it added too strong of an aroma. Instead, apples were mixed in the food, which gave the fish a deeper and milder taste with a faint sweetness.

The product has been in such high demand that Aoimori Kurenai Salmon continues to be in short supply in the market.

Japanese consumers may be most familiar with chum salmon, but trout species are included in the same family in the same genus.

Six to seven varieties, such as chum, coho, pink salmon and rainbow trout, are covered in Japan.

Natural salmon are generally not eaten raw because of the risk of parasites. And farmed coho are served cooked in most cases.

But rainbow trout and cherry salmon are raised for raw consumption.

Shipments of farmed salmon exceeded the global catch of its natural counterpart 25 years ago.

Around 70 percent of the 300,000 tons of salmon that reach the Japanese market annually is from fish farms.

During the 1970s in Japan, farming of coho salmon became common in Miyagi Prefecture. The fish was typically served cooked back then.

Japan Salmon Farm Inc., based in Aomori Prefecture, introduced for the first time a rainbow trout with elastic flesh in hopes of cashing in on rising demand for farmed salmon that can be eaten raw.

Japan Salmon Farm succeeded in mass-producing a rainbow trout that goes by the name of Aomori Salmon in the market.

Smaller culturing establishments operated by local fishermen and municipalities have recently been entering the business, providing further momentum to the salmon farming industry in Aomori Prefecture.

Fishermen in the Ohatamachi district of Mutsu, Aomori Prefecture, which faces the Tsugaru Strait, started shifting “from catching to farming” in 1989 to boost salmon cultivation. Those troubled by poor catches of squid set up a group to secure a new source of revenue.

The fingerlings of the Donaldson and steelhead rainbow trout breeds are now raised in an offshore pen for around six months for delivery.

The choppy waves there are believed to create resilient flesh and high-quality savory fat in the fish.

The pen was destroyed by a typhoon and an attack by a Steller’s sea lion. Fluctuations in water temperatures have also killed the fish being farmed.

Despite the setbacks, salmon output has topped 100 tons and online sales have started for consumers.

After the product was featured as Kaikyo Salmon on a TV show, its sales reached 116 million yen ($1 million) in 2020.

Fresh Kaikyo Salmon is available only between April and July, but processed goods based on the fish, such as vacuum-packed slices, sashimi and seasoning for the “chazuke” rice meal, are also retailed.

In coastal areas in Iwate Prefecture, salmon cultivation started on a large scale due to the decline in the natural salmon catch. In 2020, it was just 2 percent of the 1996 level.

Unlike in Miyagi Prefecture, coho salmon can be grown and shipped until August in Iwate Prefecture because of the lower water temperatures. Farming in Iwate is taking advantage of this strength.

Coho from Iwate Prefecture are currently traded under a brand name.

In Kuji, where Kohaku Salmon is made, the municipality’s fishery association in 2019 initiated culturing of coho “growing in Kuji.”

A polyphenol-rich food material using the lees of Japanese crimson glory vines--a local specialty--has been test-created under the program.

In November last year, 340,000 fry were released into a pen with a goal of increasing shipments of Kohaku Salmon more than fourfold to 600 tons this year.

Iwate University, a seafood producer and a fishery association in Kamaishi have started cherry salmon culturing on a trial basis. Farming projects are being considered in Yamada and Ofunato as well.

Some locals are describing the competition as a “regional war.”

He said a feature of cultivated salmon is that farmers can “devise culturing methods” to make their products stand out from among other brands.

“For example, the quality of fat can change at different water temperatures in farming,” Maeda said.

Hiroshi Tsuruoka, head of the farming business promotion department at Nippon Suisan Group, which is famous for its Nissui food brand, said he has long been involved in salmon cultivation.

“Demand for salmon is relatively stable and the fish has taken over the No. 1 spot from tuna in terms of popularity at conveyor belt sushi restaurants,” Tsuruoka said. “There is still room to expand the fish’s farming further.”