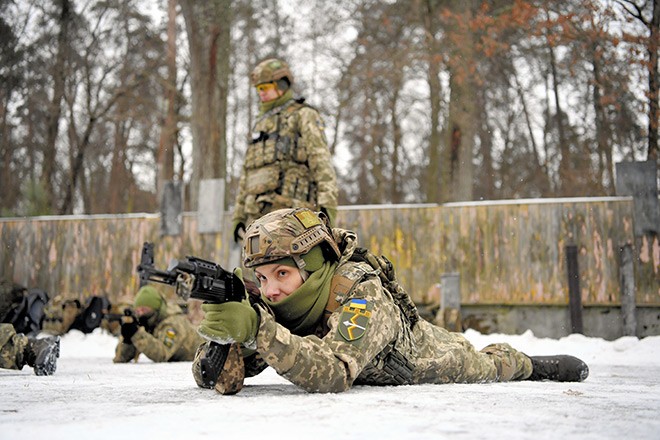 Ukraine, during its long history of subjugation to Russia, was belittled as a backwater where the inhabitants spoke a provincial language.

Poet Taras Shevchenko (1814-1861) stood up to that bias, and through his literary works elevated his mother tongue to honored status.

Born into a family of serfs, Shevchenko spoke Russian in daily life but wrote poems in Ukrainian.

His works, which represented cries of anguish and outrage of the oppressed, were deemed treasonous. Shevchenko was arrested and sent into exile.

But his verses continued to be read widely by his compatriots, and he is revered as the spiritual father of Ukrainians.

A subway station bears his name, and so does a national university.

Today, Ukraine is at the center of heightened tensions.

As many as 100,000 Russian troops reportedly have massed near the border, with blood transfusion supplies ready for potential casualties.

U.S. President Joe Biden has called on American citizens remaining in Ukraine to leave immediately. I cannot but pray for this crisis to pass.

According to a colleague staying in Kiev, schools and shops are open as usual in the capital.

However, in a recent opinion poll, respondents who expect a Russian invasion outnumbered those who don’t.

Going back in history, Ukraine was constantly at the mercy of neighboring powers and its independence was trampled on repeatedly.

After being split into east and west in the 17th century, most of the territory was incorporated into the Russian Empire.

Ukraine won its independence with the collapse of the Soviet Union. But Russia occupied the Crimea Peninsula, and the nation is again at a fateful crossroads.

Shevchenko’s poem, “The Plundered Grave,” goes: “Peaceful land, beloved country/ O my dear Ukraine!/ Why, my mother, have they robbed you?/ Why do you thus wane?”

The protest poet’s lament and prayer ring out with painful urgency.