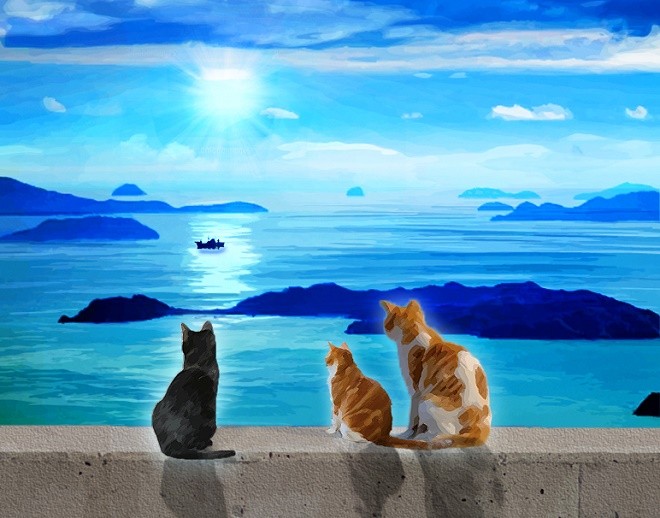 almost a friend
the seagull
with the broken wing
--Eva Limbach (Saarbruecken, Germany)

winter shore--
a different self
wades in
--our thomas (Exeter, New Hampshire)

At the horizon
Of the ocean
Old bottles
--Christopher Calvin (Java, Indonesia)

This haiku links mysterious sights and smells with the afterworld. Plum blossoms have a delightful fragrance that is picked up by our olfactory senses on warmer days at this time of year. The haikuist commemorated Tohta Kaneko’s Feb. 20, 2018, death by invoking his haiku: ume sai te niwaju ni aozame ga kite iru.

Cherry blossoms are thought to be unscented. However, the flowering cherry on Izu-Oshima, the largest of Tokyo Prefecture’s outlying islands, is praised for its showy flowers, edible fruit, medicinal leaves and powerful fragrance. It is the paternal Prunus speciosa of the beautiful “somei-yoshino” cherry tree variety that Mihaela Babusanu recalled hazily in Bacau, Romania. A fellow haikuist in nearby Jibou, Mircea Moldovan, prefers the Prunus avium.

back into lockdown--
becoming blurred in my mind
cherry blossom scent

Matsuo Basho (1644-1694) was almost rendered speechless when he landed on Oshima island in Miyagi Prefecture, and viewed the Matsushima islands further off in the ocean: shimajima ya chiji ni kudakete natsu no umi.

All those islands!
a thousand shattered pieces
the sea in summer

Organizers of the Ito En Oi Ocha New Haiku Contest awarded 14-year-old Yujiro Shimizu with the grand prize in its 3oth contest for a haiku that Arthur Binard, the contest’s judge, suggested “imparted that another fish will then follow, and then another after that.”

Hanamo Namiki participated in making Amami-style New Year’s fish soup in a home economics class held last December at Oshima Kita High School. That same month she won a local newspaper prize for a delicious-smelling haiku entered into a contest organized by the International University of Kagoshima. Also from the remote Amami-Oshima island in Kagoshima Prefecture, Aoi Ikeda heard in January that she had won a prize for an aromatic haiku entered into an international haiku contest organized in Akita.

Autumn breeze and
under the persimmon tree
cool of the evening

On a trip to the island of Sicily, Junko Saeki from Tokyo said she was “stunned to find a structure exactly like the Parthenon in Greece … on top of a hill, but surrounded by cactuses and tall trees.” She was struck by the ancient urge to “reproduce home” using whatever was available locally, noting this “also holds true for today’s immigrants.”

a red Parthenon
ancient Greeks away from home
Sicilian rain

Minko Tanev recommends a visit to sail the cobalt colored waters of the smallest sea in the world where you can compose haiku about the outlines of islands and an archipelago with marble remnants of classical antiquity.

Marmara Sea
the Prince’s Islands
rising in the mist

A delicious odor triggered Angela Giordano’s memory of her maternal home in Avigliano, Italy: in the ancient village the inviting scent of fish soup.

Winter storm
even the taste of fish soup
an elixir

Ken Sawitri’s haiku was inspired by a “popular dish full of aromatic herbs and spices.” Explaining that “nearly every island has its traditional version,” her favorite is made with ariid catfish, peppers and chilies from the north coast of Central Java.

hot fish head soup
I forget we are
mortal

Timmer salivated in this one-line haiku: a dew-spangled spider web my dry mouth.

Luciana Moretto enjoyed a cookie shaped like a sea bass, which in Venetian dialect is called “baicoli.” Sailors ate these dry biscuits during long sea voyages.

Ram Chandran didn’t wait for the rain to subside before slurping a broth made from freshwater carp at a street market in Madurai, India.

Limbach and Vladislav Hristov, respectively, were disappointed with the fisher’s catch, whereas Dina Towbin was doubly delighted in Washington, D.C.

Fish for me, fish for you
This smells fishy enough for two
Fishmonger’s delight

Xenia Tran concocted a haiku while waiting in a queue outside the Highland Deli to takeaway smoked haddock soup with braised potatoes: a winter warmer in the Scottish Highlands and Islands. In the cooler air of eventide, Phillips quickly tossed together a reddish-orange colored soup using a vegetable base that had been slowly simmering all afternoon. Patrick Sweeney won’t touch blubber.

Zeljko Vojkovic owns an English Setter with a silk-fringed white fur coat: The handsome hunter lost the trail of a lucky white rabbit on the island of Vis in Croatia.

fresh snow
hid the rabbit’s scent
from the dog

Moldovan can’t travel around. Having enjoyed a long lifetime of sunshine “in the wide-open Midwest,” United States, Horst Ludwig looked down from his new perch high atop a building complex for senior citizens in rainy and overcast Seattle. John Hamley dreamt he was holding onto a spinnaker pole until he awoke in a hospital room with a view of yachts racing back and forth from the Thousand Islands to Lake Ontario.

Sailboats
on the Bay of Quinte
squeaky IV pole

In a moment of insecurity, Daniela Misso felt protected by a divine wind in San Gemini, Italy. Terrie Jacks left her worries behind in St. Louis, Missouri.

nowhere to go...
a wind rises
in the bush

going on a trip
unpacking my
senior moments

Before COVID-19, Kanematsu enjoyed the idea of heading to a warm southern island to naturally boost his health with vitamins made when skin is exposed to ultraviolet rays. Receiving a booster shot on the island of Sri Lanka, Ashoka Weerakkody forgot all about the unmasked owners of secret bank accounts, private jets, yachts, mansions and artworks on offshore islands. In Peshawar, Pakistan, Mohammad Azim Khan found it hard to keep his head above the ebb and flow of human behavior influenced diseases.

Tsanka Shishkova wore green turquoise at the birth of the year. Mary Leopkey rejoiced at the return of fragrant narcissi on Texada island, British Columbia. J.L. Huffman kept her eyes closed until the sun disappeared below the horizon off the island of Jamaica. Laughing waters picked up sand dollars, sea stars and starfish.

the advent
of the water tiger year
cerulean blue dress

The next issues of the Asahi Haikuist Network appear Mar. 4 and 18. Readers are invited to send haiku about nightingales or robins on a postcard to David McMurray at the International University of Kagoshima, Sakanoue 8-34-1, Kagoshima, 891-0197, Japan, or e-mail to (mcmurray@fka.att.ne.jp).