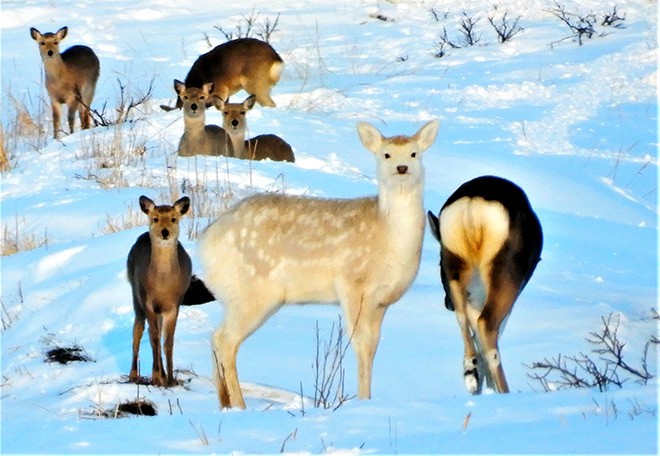 A white “ezoshika” deer appears in the Sarobetsu plain in Horonobe, Hokkaido, on Feb. 13. (Masatoshi Narayama)

Two indigenous white “ezoshika” deer, considered a “messenger of God,” were seen separately grazing in snow-covered fields in the Sarobetsu plain in northern Hokkaido on Feb. 13.

The two were spotted in the late afternoon on the eastern side of the scenic Ororon Line, a road running along the coast of the Sea of Japan. They appeared to be does.

One was seen in a snowfield in Toyotomi town, grazing on what was initially a round hay bale. The hay was strewn about after being eaten almost daily by animals.

This ezoshika is apparently a “regular” visitor to the location since it was also spotted there in January. The other ezoshika was seen accompanying a slightly larger doe in a snowfield in Horonobe town.

Deer are normally covered with dark brown fur this time of winter, but the white deer had vivid white spots on their bodies, making them look even more divine.

A white deer has been spotted around the area from time to time. The latest sightings confirmed that there are at least two white deer.

The northernmost main island has been hit by heavy snow this winter, apparently prompting herds of the indigenous Hokkaido deer to search for food in coastal areas that have experienced lighter snowfall.