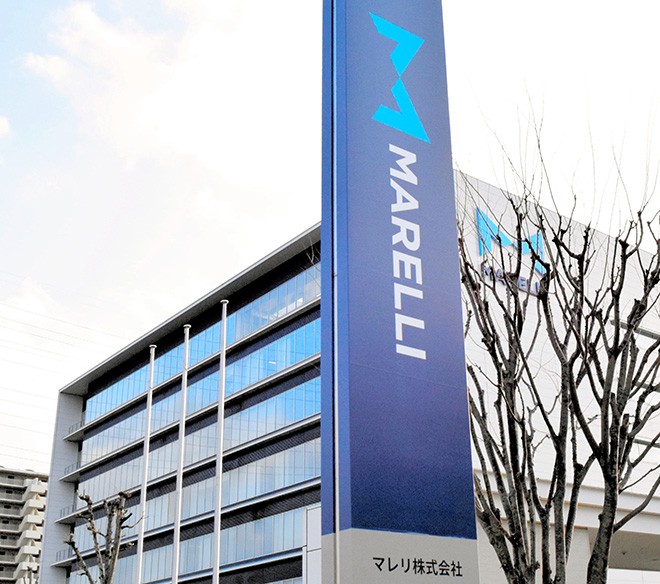 The main office building of Marelli Holdings Co. in Saitama (The Asahi Shimbun)

Saddled with debts to the tune of 1 trillion yen ($8.69 billion), leading auto parts manufacturer Marelli Holdings Co. has turned to major banks and other companies for funds to help turn its affairs around, informed sources said.

Mizuho Bank is among entities that the Saitama-based company is expected to approach in talks for financial support.

Marelli has not released a formal statement over its requests to banks and companies for financial assistance.

But the company said it is operating as usual and maintaining its workforce.

One option that Marelli is weighing, according to the sources, is to resort to an alternative dispute resolution (ADR) that provides an out-of-court resolution mechanism to help businesses deal with heavy debts.

Under the ADR process, Marelli would be allowed to hold talks with banks and business partners to release the company from some of its debt obligations while it seeks financial assistance.

The ADR process is generally seen as a speedier way to move forward to enable Marelli to rein in the fallout on its business operations, compared with a legal framework such as civil rehabilitation.

Still, it is also open to rebuilding its operations via a non-ADR measure, the sources said.

It apparently opted for a drastic business rebuilding strategy due to sales losses incurred from the novel coronavirus pandemic that further strained the company’s financial standing.

Mizuho Bank and other lenders are considering extending fresh loans totaling around 100 billion yen to help the company stay afloat, according to the sources.

Nissan is also planning to offer assistance to Marelli, the sources added.

Marelli’s predecessor was Calsonic Kansei Corp., a company in the Nissan group.

Nissan sold its stake in Calsonic Kansei to U.S. investment fund KKR in 2017.

According to Marelli, the company has about 170 facilities worldwide and about 58,000 employees in the group.

In Japan, the company operates factories in Gunma, Saitama and Kanagawa prefectures, and elsewhere.

According to Tokyo Shoko Research Ltd., a credit reporting agency, Marelli has chalked up red ink figures in recent years.

The company sold its main office building in Saitama as part of efforts to turn itself around while securing financial support from KKR and major banks.

(This article was written by Junichi Kamiyama and Eisuke Eguchi.)