Research team unravels how dagger in Tut’s tomb was forged 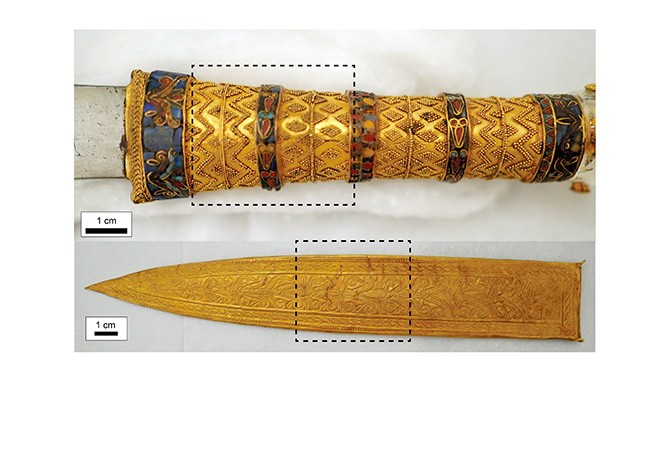 The hilt, top, and sheath of the iron dagger found in the tomb of Tutankhamun (Provided by Chiba Institute of Technology)

A Japanese research team has concluded that an iron dagger made of meteorites found in the tomb of Egyptian pharaoh Tutankhamun was forged at temperatures of about 950 degrees or lower.

The researchers from Chiba Institute of Technology used analytical equipment they brought to the Egyptian Museum of Cairo in February 2020 to unravel the mystery of how the dagger was produced through chemical analysis.

The equipment was used to determine the elements that went into the iron dagger as well as measure details on its surface.

Research until now had determined that the dagger was made mainly from iron meteorites. The dagger also contained between 10 to 12 percent nickel, with the main ingredient being octahedrite, one type of iron meteorite.

Analysis of the dagger by the team confirmed the existence of iron sulfide which is commonly found in octahedrite. There were also signs that the metal had been heated to at least 800 degrees.

An analysis of the distribution of nickel on the surface found remains of a crystal known as the Widmanstatten pattern that is also characteristic of iron meteorites.

Because that pattern disappears when the metal is heated to temperatures above 1,000 degrees, the team concluded the dagger was forged at temperatures of about 950 degrees or lower.

The gold hilt of the dagger also contained traces of calcium, which would normally not be found when gold has been processed. That led to the belief that plaster was used to attach the ornaments to the hilt.

Egypt did not have the technology to manufacture iron or plaster at that time. But in the Amarna letters written on clay tablets that was discovered along the Nile River there is an entry about an iron dagger presented as a gift to the Egyptian king from Mitanni, a kingdom in northern Mesopotamia.

That reference led the research team to conjecture that the dagger was a gift to Amenhotep III, the grandfather of Tutankhamun.

The results of the research were published on Feb. 11 in the online edition of Meteoritics and Planetary Science, an American scientific journal.

“At that time in Egypt, iron was considered an element that on rare occasions fell from the skies and was about 80 times more valuable than gold," said Takafumi Matsui, president of the Chiba Institute of Technology, who specializes in comparative planetology and led the research team. "Tutankhamun likely inherited the iron dagger from his grandfather and it was placed in his grave when he died at a young age.”

Tutankhamun ruled Egypt in the 14th century B.C. and archaeologists have turned up an amazing number of ancient artifacts buried with the mummified body of the king.

In the 1990s, a team of researchers at the National Museum of Japanese History conducted experiments to determine if swords could actually be forged from iron meteorites. They collected six types of iron meteorites from around the world and had master swordsmiths attempt to forge swords.

The conclusion reached was that swords could be manufactured at temperatures under 950 degrees if there were few impurities such as sulfur and phosphorus in the iron meteorite.

Tsutomu Saito, now a professor of cultural properties science at the museum, was part of that team in the 1990s.

He said the latest findings were similar to what the team discovered about three decades ago.

“It provides evidence that ancient people had achieved the conditions that we predicted scientifically,” Saito said.

Forging iron meteorite that contains nickel is difficult because of the hardness of the material.

But Saito believes artisans of that time used their instinct and experience to find the right temperature to heat the precious materials they used to manufacture iron products.

“This an important finding that shows the starting point of mankind’s quest to develop iron manufacturing technology,” he said.