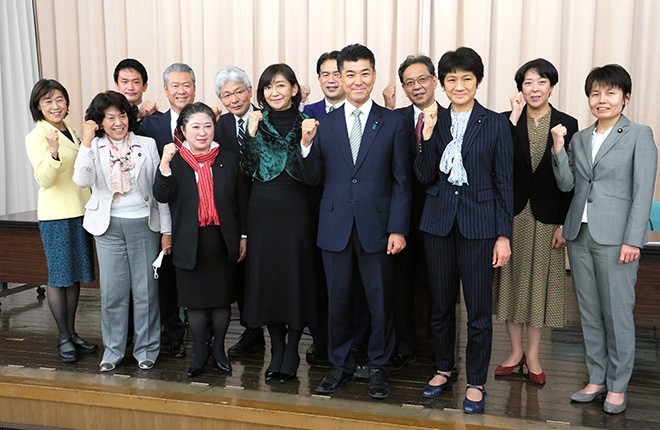 Kenta Izumi, leader of the Constitutional Democratic Party of Japan, and other senior party officials in December. Women account for nearly half of the party’s leadership in line with Izumi’s policy. (Asahi Shimbun file photo)

With a new leader at the helm, the main opposition Constitutional Democratic Party of Japan intends to field an equal number of female candidates in the Upper House poll this summer, which would make it the first party to achieve gender parity in an election.

Traditionally, women’s representation in Japanese politics has remained far below the international norm.

Under its draft action plan for fiscal 2022, the party also will seek the cooperation of other opposition parties to field unified candidates in single-seat constituencies in the hope of unseating legislators with the ruling Liberal Democratic Party.

The CDP suffered a humiliating defeat in the Lower House election last October, which led to Yukio Edano, 57, resigning as the party’s longtime leader. He was replaced by Kenta Izumi, 47, in a party vote in November.

The CDP’s slogan for the election, “Let’s overcome a stagnant Japan while protecting people’s lives, daily living and peace,” is expected to be adopted by the party’s general assembly on Feb. 27.

The draft action plan also calls for the party to implement an array of approaches to woo unaffiliated and middle-of-the-road voters, in addition to its traditional, progressive supporters, in the leadup to the election.

In single-seat constituencies, it will work to field candidates supported by the opposition camp.

The party made clear it intends to make political mileage out of its moves to ensure that half of its candidates in the election are female.

The CDP, according to the action plan, is committed to “swiftly responding to the voices of the public and continuing to make specific and constructive policy proposals.”

For this purpose, it will push to stage “town meetings” across the nation to get feedback from the public, drawing on the initiative proposed by Junya Ogawa, the CDP’s new policy chief.

The CDP has opted to focus on its policy proposals, rather than fiercely attacking the government, after its setback in the Lower House election. But it will also work harder to keep close tabs on the government and the ruling coalition, according to the policy document.

The party will take the stance of pushing for realistic approaches in diplomacy and defense, elaborating more on the areas than in the previous action plan.

“The party will help to enact legislation with regard to necessary defense capability to deal with changes in the security environment around the country,” the draft stated.