Ukrainian posts YouTube video critical of crisis in her homeland 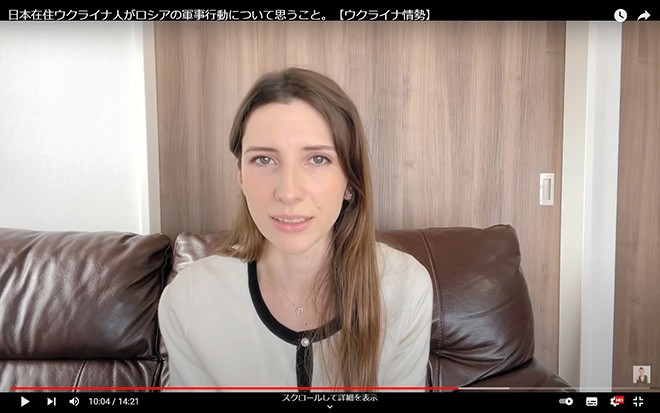 Kristina Pidluska describes the situation in Ukraine in a video posted on YouTube in late January. (Captured from YouTube)

FUKUOKA--A Ukrainian female YouTuber living here who normally posts cultural and travel videos has struck a nerve with one criticizing the buildup of Russian troops at her country's border.

Kristina Pidluska was at first concerned about posting such a negative video, particularly since most of her past videos have been about upbeat topics such as Ukrainian culture and interesting sites she has visited in Japan.

But her video, posted on her YouTube channel that she started in June 2021, has been viewed about 130,000 times and attracted positive comments.

With the growing global focus on whether Russian troops will invade Ukraine, Pidluska decided to focus on that situation.

In the video, she said, "War could break out at any time. I am full of such emotions as fear, worry and anger.”

Pidluska was born in Ivano-Frankivsk, a city in southwestern Ukraine. When she was 18, she developed an interest in Japan after becoming a fan of a Japanese band that performed in fancy costumes and makeup.

She majored in Japanese at Kiev National Linguistic University and after completing graduate school, came to Japan in March 2016 to find a job. She eventually moved to Fukuoka where her husband’s family lives.

She now works at a mail-order company in Fukuoka while raising a 4-year-old daughter.

Ukraine became independent in 1991 and about 42 million people live in the nation, which is about 1.6 times larger than Japan. Close to 2,000 Ukrainians now reside in Japan. Tensions with Russia increased after Moscow annexed Crimea in 2014.

Russia began massing troops near the borders of eastern and southern Ukraine from autumn 2021.

But Pidluska said she was not surprised because she always felt the possibility of invasion by Russia even when she was living in Ukraine.

“Ukrainians live constantly under a sense of anxiety toward Russia,” she said. “We would not be able to carry on with our daily lives unless we were mentally tough.”

She communicates by social media almost daily with family and friends in Ukraine. Until January, many continued to work and go to school as normal, but she recently began to notice a change.

On Feb. 14, when Pidluska contacted a friend from university who still lives in Kiev, she was told that the friend had packed to be prepared to evacuate to western Ukraine at any moment.

Another friend who lived in Lviv near the Polish border has temporarily moved to Poland.

Ukrainian media have begun reporting on politicians and businessmen fleeing the country.

While her hometown is far from the Russian border, she is worried that flights between Japan and Ukraine would be suspended if Russia invaded and she would be unable to see her parents.

Pidluska holds no animosity against Russians in general, noting that many of those living in Ukraine have a Russian background. She has taken videos with a Russian who also lives in Japan.

“It is the Putin administration that represents danger,” she said. “After independence, Ukraine has strived to develop on its own, but Russia is always interfering.”

She posted the video describing the situation in Ukraine in late January. It was made in part due to the increase in comments to her channel expressing concerns about the safety of her family and friends in Ukraine.

The comments attached to the video indicate that Japanese viewers have gained a better understanding of what is occurring in Ukraine, especially since she spoke in Japanese.

One comment expressed the desire that peace would soon come to Ukraine.

“I want the Japanese people to understand the situation that is the reality in Ukraine and not simply as news that they see on TV,” Pidluska said. “We might be able to prevent an invasion by Russia if the world shows its support.”