Kishida tells Putin of his ‘grave concern’ over Ukraine 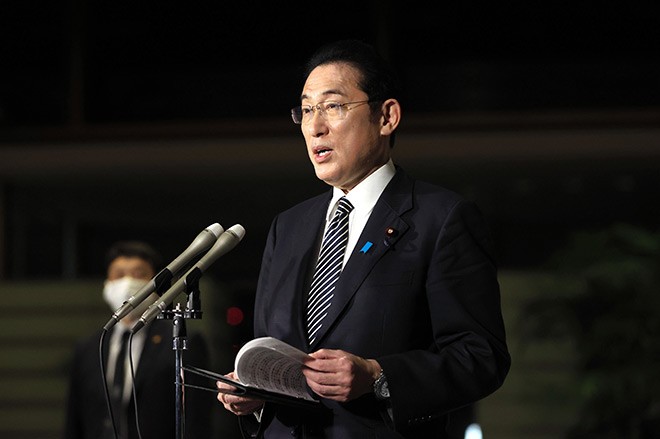 Prime Minister Fumio Kishida expressed his "grave concern" to Russian President Vladimir Putin in a phone conversation on Feb. 17 over the possible invasion of Ukraine.

Kishida told reporters after the roughly 30-minute discussion that he urged Putin to seek a solution that is acceptable to concerned countries through diplomatic means rather than changing the status quo by force.

Kishida also said the Russian president explained his views on and the background to the Ukrainian situation.

Kishida plans to coordinate a response with the Group of Seven nations in the event of a Russian invasion of Ukraine. He declined to comment on whether he touched on the possible G-7 sanctions that would be taken against Russia during his conversation with Putin.

The two leaders also discussed peace treaty talks over the disputed Northern Territories, which are islands off the coast of Hokkaido seized by the Soviet Union at the end of World War II and claimed by Tokyo.

Kishida said they agreed that it is important for the two countries to deepen bilateral relations in various areas, such as trade.

Kishida also spoke with Ukrainian President Volodymyr Zelenskyy on Feb. 15 over the phone to express his support for Ukraine.