Official: Falsified data broke law but punishment is not up to us 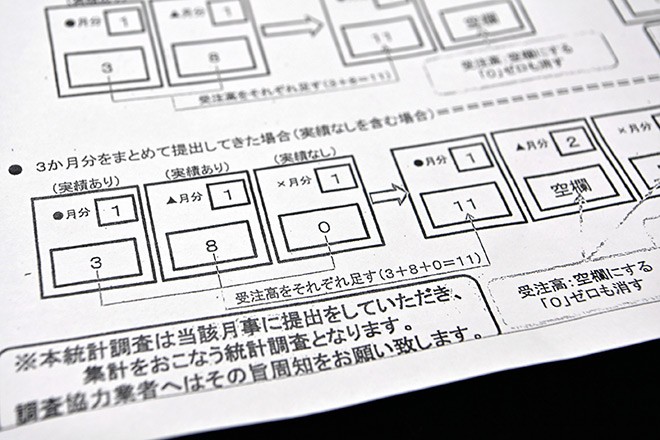 Government officials acknowledged that infrastructure ministry bureaucrats violated a law through their practice of inflating construction contract data but said law enforcement authorities should decide if anyone should be punished.

The issue was raised at the Feb. 17 session of a subcommittee of the Lower House Budget Committee.

Masaaki Akaike, a senior vice minister in the Cabinet Office, said provisions of the Public Records and Archives Management Law were broken because infrastructure ministry bureaucrats did not follow procedure in discarding records submitted by construction companies.

Those records were rewritten by the ministry officials in compiling monthly construction contract figures.

But Akaike would not say if that action constituted a violation of Criminal Law provisions against damaging government documents.

The reports submitted by construction companies were not properly included in an administrative document file register as called for by the law.

In addition, required discussions were not held with the Cabinet Office before infrastructure ministry officials discarded the reports because the preservation period had ended.

Takashi Kii of the opposition Constitutional Democratic Party of Japan asked if failure to follow such procedures was a legal violation.

Akaike said, “It was extremely inappropriate because it violated the procedures set out in the Public Records and Archives Management Law.”

He also said that notices had been sent out to all central government agencies and ministries to be careful when discarding government documents.

When asked about a possible Criminal Law violation, Akaike only said, “Such decisions should be made for each separate case based on evidence obtained by investigative authorities.”

Kii also asked if infrastructure ministry officials violated the Statistics Law by adding figures to official data for a number of months when construction companies were late in submitting their reports.

Yasushi Kaneko, the internal affairs minister who oversees government statistics, said it was up to investigative authorities to determine if violations had been made that deserve criminal penalties.

The Statistics Law prohibits deliberate compiling of fundamental statistics, including the construction contract figures, not based on facts. Possible penalties for such violations include fines and prison sentences.

Kaneko was asked if his ministry would file a criminal complaint about the construction contract statistics.

“It would be difficult to file such a complaint because we are not in a position to determine the specific actions taken by bureaucrats of various ministries,” he said.