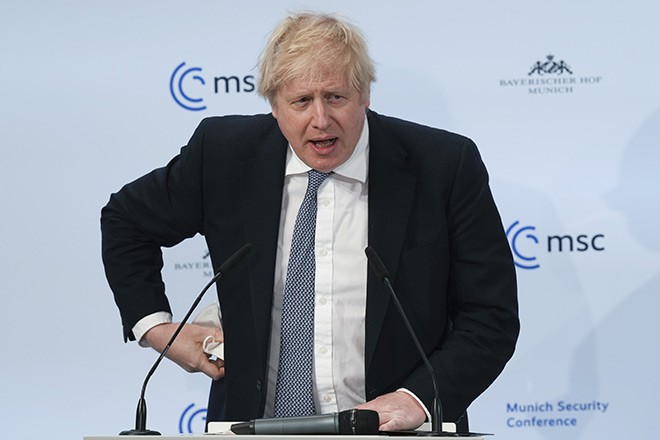 LONDON--The United States and Britain would seek to cut off Russian companies' access to U.S. dollars and British pounds if the Kremlin orders an invasion of Ukraine, British Prime Minister Boris Johnson told the BBC.

"The plan that we are seeing is for something that could be really the biggest war in Europe since 1945 just in terms of sheer scale," Johnson said.

Johnson said that sanctions on Russia in the event of an invasion would go much further than previously suggested in public.

He said the United Kingdom and the United States would stop Russian companies "trading in pounds and dollars"--a move that he said would "hit very, very hard" with its impact, the BBC reported.

Britain, home to the center of global foreign exchange trading, had threatened to block Russian companies from raising capital in London and to expose property and company ownership if Russia invades Ukraine.

Russia denies it plans to annex another part of Ukraine and President Vladimir Putin says the West is sowing hysteria in a crude attempt to lure Russia into war after ignoring the Kremlin's concerns about NATO enlargement after the Cold War.

Russia has more than 150,000 troops on the Ukrainian border and the United States, Britain, the European Union and NATO fear Putin may be planning to invade in a bid to restore some of the territory and clout lost by Moscow when the Soviet Union collapsed in 1991.

Given Russia's position as one of the world's top exporters of oil, gas and metals--which are largely priced and settled in U.S. dollars--blocking Russian companies from access to dollar markets could have a stinging impact.

Putin has repeatedly called for reducing reliance on the U.S. dollar trade.

Russia's largest oil company Rosneft fully switched the currency of its contracts to euros from U.S. dollars to shield its transactions from U.S. sanctions, CEO Igor Sechin said in 2019.

Johnson has said the government would target Russian banks and Russian companies. Britain has not spelled out who would fall under the sanctions, but has pledged that there would be nowhere for Russian oligarchs to hide.

Hundreds of billions of dollars have flowed into London and Britain's overseas territories from Russia since the fall of the Soviet Union in 1991, and London has become the Western city of choice for the super-wealthy of Russia and other former Soviet republics.

Western intelligence services believe Putin may order an unconventional attack on Ukraine which might require the West to make a swift judgement call on the imposition of Russian sanctions, a senior Western official said on Friday.

"In that situation, the reality is that it would be more difficult to call exactly when a line had been crossed," the official said. "When we judge that Russia crossed a line on this... then we need to act quickly and at scale in terms of our sanctions response."