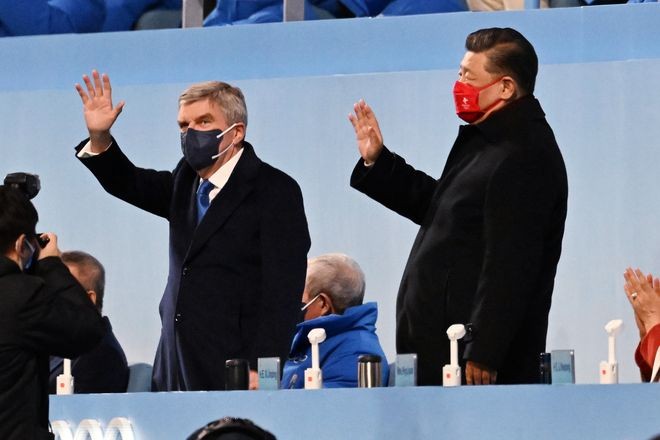 The Beijing Winter Olympics that wound up Feb. 20 were blessed by outstanding performances, thrilling competition, judging controversies and a distressing doping scandal.

People around the world no doubt marveled at the exquisite beauty of the top-level athletic prowess as they tuned in to coverage across linear TV and digital platforms over the course of 17 days.

Thomas Bach, the president of the International Olympic Committee, praised the Beijing Games, saying in his speech at the Closing Ceremony that the Olympic spirit “shine so brightly.” But nothing could have been further than the truth.

China managed to prevent the spread of the novel coronavirus at the Games or into the wider community by placing everybody involved within a tightly sealed “bubble,” in line with its stringent control measures. But this approach came at a huge cost. Exchanges and sharing of experiences between athletes and spectators were blocked as a result. The situation was exacerbated by strict restrictions on media coverage. The 17 days of the so-called festival of peace unfolded in an eerily muffled space totally isolated from the rest of the world.

During this time, there was little talk about China’s dismal human rights record, a matter of global concern. A key reason was that the Organizing Committee tried to muzzle athletes and others involved from making any comment about human rights issues with the threat of punishment under Chinese law.

But at least one contender criticized the decision to hold the Winter Olympics in China after returning safely home from the event. The Chinese government must not forget that its human rights violations continue to draw criticism from the international community.

The Winter Games also raised many questions about the IOC’s commitment to its tenets and responsibilities, such as promoting human dignity, standing against discrimination and protecting athletes.

Bach never voiced any objection to the Organizing Committee’s relentless quest for the Games to go ahead and went so far as to watch an event while chatting smilingly with a female Chinese tennis player who went missing for a while after she aired sexual abuse accusations against a powerful Communist Party official. The way he eagerly cooperated with Beijing to ensure smooth management of the Olympics signaled a lack of serious attention to human rights problems.

There is no doubt that the IOC’s lenient attitude to Russia’s state-sponsored use of performance-enhancing drugs over many years was a factor behind the doping scandal that enveloped 15-year-old Russian skating sensation Kamila Valieva. But Bach never referred to the need for the IOC to take the criticism seriously.

The Olympic Charter states: “The Olympic Games are competitions between athletes in individual or team events and not between countries.” But the reality of the Games has become divorced from this ideal. There is no denying that the Olympics are a tool to enhance national prestige.

The proliferation of team events in recent years has helped bolster the popularity and profitability of the Games. At the same time, it also seems to have left many athletes exhausted and fired up unhealthy sentimental nationalism. It is probably time to rethink the way the Olympics are organized and promoted from the viewpoint of the movement’s original goals.

Beijing 2022 was also marred by cases that cast doubt on the transparency and fairness of rules, such as controversies over outfit checks, scoring by judges and decisions on disqualification.

If the quality of judges and judging technologies and systems has fallen behind progress in athletes’ skills and tactical elements of participation in the Games, it is high time they were reviewed and improved.