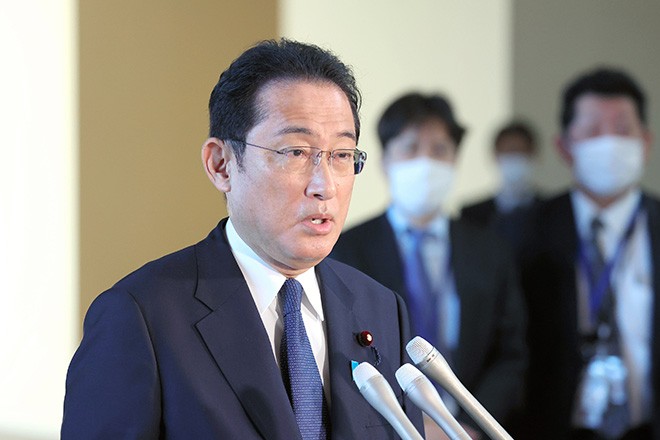 Prime Minister Fumio Kishida talks about the crisis in Ukraine at the prime minister’s office on Feb. 22. (Koichi Ueda)

“This series of actions by Russia violates Ukraine’s sovereignty and territorial unity, and it is not acceptable,” Kishida told reporters at the office of the prime minister.

“I bitterly denounce them,” he added.

Kishida said Russia’s military deployment was a clear “violation of international law and runs contrary to the Minsk agreements.”

He said his government “will pay close attention to the situation and work together with the global community, including Group of Seven nations, to respond strongly through sanctions and other means” if Russian troops make inroads into Ukrainian territory.

Kishida, however, stopped short of declaring the deployment of troops as an invasion.

The prime minster emphasized that Japan will “continue to deal with the situation properly.”

Aside from coordinating with G-7 and other nations to impose sanctions and other steps, Kishida said Japan “will make its own decision as well.”

While some Japanese nationals in Ukraine have fled the country, “there are many who have Ukrainian family members and are determined to stay there,” he said.

The government is continuing to urge people to evacuate as tensions ratchet up, Kishida added.