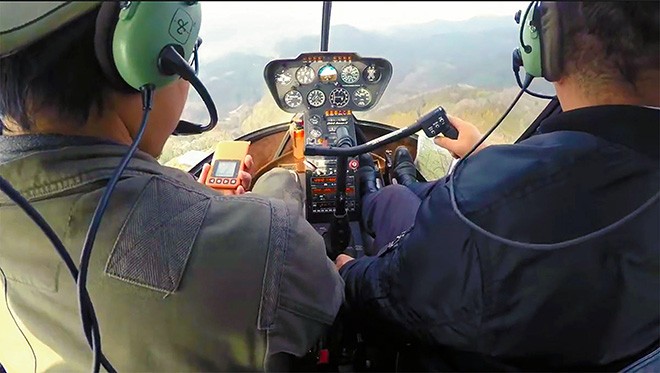 A scene from a search training exercise in a helicopter, with the person on the left holding a palm-size radio receiver (Provided by Authentic Japan Co.)

FUKUOKA--As often happens in hazardous winter conditions, a climber went missing in a snow-covered mountain in early February, necessitating that a search team be sent out.

While two climbers became stranded in the 1,729-meter Mount Daisen in Tottori Prefecture, one of them descended to safety on his own.

Amid whiteout conditions, a ground-based search party was able to locate the missing climber in a short period of time by using the Cocoheli radio-based search support service. The climber, who was found unconscious, later died.

Cocoheli subscribers carry a small radio transmitter that can be attached to clothing or a backpack. In the event they go missing in the mountains, search-and-rescue workers, often aboard a helicopter, pick up radio waves to locate them with high accuracy.

With more than 40,000 subscribers across the country, police and fire departments in Tokyo and 34 prefectures have introduced the Cocoheli radio receiver.

“You can prepare not only for a mountaineering accident but also for when children or elderly people are lost on city streets,” said Ko Takayanagi, a marketing official at Authentic Japan Co., which launched the service in 2016.

The service was used in 33 cases to search for missing people by the end of last year.

In five cases, subscribers could not be located because they were not carrying the transmitter or for other reasons. In the remaining 28 cases, 40 percent of subscribers were discovered within an hour, and more than 80 percent were found within three hours.

MARGIN OF ERROR OF SEVERAL METERS

The thin transmitter, measuring 4 by 6 centimeters and weighing 20 grams, can operate for about two months on a single charge. With no on-off switch, it remains turned on.

By using two types of radio waves, the service can help locate the subscriber within a margin of error of several meters.

Long-distance transmission signals can be picked up by a dedicated palm-size receiver at a location up to 16 kilometers away. The transmitter’s location is determined by its ID number.

Short-distance transmission signals are based on the Bluetooth technology used for personal computers and other devices. If the transmitter is in a location with a panoramic view, the signals can be picked up by a smartphone 100 meters away or farther, allowing families to search for missing children or elderly people in urban areas.

Mobile phones outfitted with GPS technology have become common in recent years, but they often lose their signals in the mountains. There are also concerns about the batteries dying.

The service charges an initial fee of 3,300 yen ($28.75) and an annual membership fee of 5,500 yen. A discount is available for the first subscription year.

The number of mountaineering accidents has been increasing, with more than 2,000 cases reported annually in recent years, according to the National Police Agency.

While disorientation accounts for 40 percent, there are also many instances of climbers slipping and falling.

“I recommend you carry (the Cocoheli transmitter) if you go mountain climbing,” said mountaineer Ken Noguchi, who promotes the service. “It can not only increase the chances of survival but also reduces the burden and risk for search parties.”

RENTAL AVAILABLE IN MANY AREAS

Some mountain lodges and information centers offer the transmitter for rental, and service counters have been set up at the Asahidake Visitor Center in Hokkaido and elsewhere.

Some ski resorts and trail race organizers have taken one further step to require skiers and participants to carry the transmitter.

The operator of the Kawaba ski resort in Gunma Prefecture requires skiers and snowboarders to wear the transmitter offered for rental at the ticket office if they take chairlifts to backcountry areas outside the ski slope.

Some ski resorts offer the rental service to those who want to carry the transmitter.

During a trail race held in Nagano Prefecture in July, a runner who went off course by more than 1 km was found via the Cocoheli in 30 minutes and was rescued, according to the company.