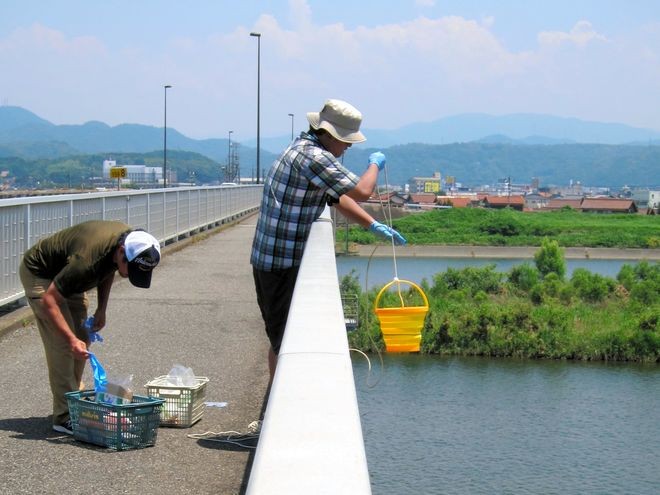 Researchers collect a bucket of water at the mouth of a river in Shimane Prefecture to analyze DNA from fish and animals. (Provided by Yoh Yamashita, a specially appointed professor at Kyoto University)

Thanks to advances in genetic surveying methods, scientists have found that aquatic ecosystems with ample forest cover are home to a rich variety of threatened fish species.

By simply collecting a bucket of water at the mouths of streams and rivers, researchers concluded that forests contribute to the preservation of biodiversity in estuaries.

“For the first time, we have successfully presented scientific data that suggests having abundant forest cover enriches the conditions of local streams,” said Yoh Yamashita, a specially appointed professor of coastal resource ecology at Kyoto University, who heads the team.

Forest and ocean ecosystems have a reciprocal relationship through aquatic circulation, such as from rivers and rainfall.

Although people plant trees and do other conservation work with the idea that preserving local forests is also likely good for the sea, it was previously unknown whether these efforts could actually help local ecosystems thrive.

According to Yamashita, the richness of the waters of an ecosystem can be assessed by counting how many species live there. Under the conventional study method, living creatures were primarily sampled or observed by using nets and divers.

This kind of research has many problems. It requires a lot of time and a lot of people to do the work, and it is difficult to discover rare subspecies put on the Red List of threatened species.

Yamashita and his colleagues spent more than two decades examining a few locations in detail. Because it was unrealistic to document ecology throughout Japan in the traditional way, the research team decided to rely on environmental DNA from the body parts and excrement of creatures found in seas and streams.

They used a technique called environmental DNA metabarcoding to measure how many fish species inhabit the areas.

The scientists gathered a bucket of water at the mouths of 22 class-A rivers and scanned DNA in the samples from June through August 2018--just like barcodes on products.

For Yamashita, who has long studied the ecological connections between forests and oceans, this new method “looks like magic compared with its conventional counterpart.”

The survey identified 186 fish species, including 49 ones on the Red List. The researchers found 20 to 60 species in each river, and three to 11 endangered subspecies.

The team compared the outcomes to data released by the government and other sources, including population density, the scale of forested land and the sizes of rice paddies and other agricultural fields.

They analyzed the connections between the surrounding conditions and the number of species identified, and found that the mouths of streams that had more forests along them were home to many varieties of species on the Red List.

The findings of the nationwide survey have been published in the scientific journal Conservation Biology at (https://doi.org/10.1111/cobi.13849).