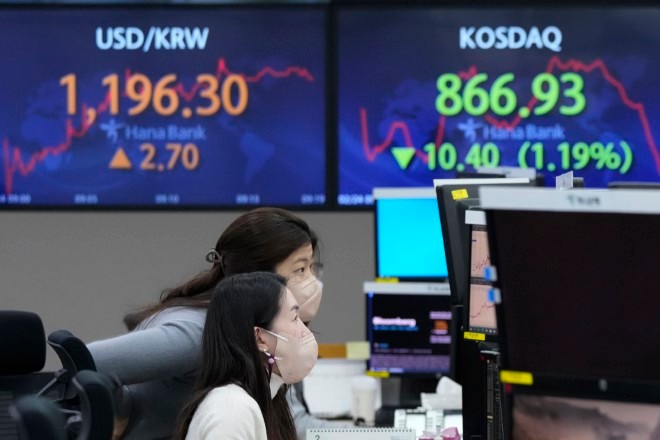 Oil prices jumped more than $4 on anxiety about possible disruptions of Russian supplies. The ruble fell 5 percent against the dollar.

Putin said the military operation was needed to protect civilians in eastern Ukraine, a claim Washington had predicted he would make to justify an invasion. As Putin spoke, explosions were heard in Kyiv, Kharkiv and other areas of Ukraine.

President Joe Biden denounced the attack as “unprovoked and unjustified" and said Moscow would be held accountable, which many took to mean Washington and its allies would impose additional sanctions. Putin accused them of ignoring Russia’s demand to prevent Ukraine from joining NATO and to offer Moscow security guarantees.

“The relief rally has quickly reversed course,” said Jeffrey Halley of Oanda in a report. “Equities are tanking in Asia.”

On Wednesday, Wall Street’s benchmark S&P 500 index fell 1.8 percent to an eight-month low after the Kremlin said rebels in eastern Ukraine asked for military assistance. Moscow had sent soldiers to some rebel-held areas after recognizing them as independent.

Asian economies face lower risks than Europe does, but those that need imported oil might be hit by higher prices if supplies from Russia, the third-largest producer, are disrupted, forecasters say.

More than 85 percent of stocks in the S&P 500 fell. Tech companies weighing down the index most.

The Nasdaq, dominated by technology stocks, lost 2.6 percent to 13,037.49, led by steep losses in Apple and Microsoft. That put the index 18.8 percent below its November 2021 high.

Investors already were uneasy about the possible impact of the Federal Reserve’s plans to try to cool inflation by withdrawing ultra-low interest rates and other stimulus that boosted share prices.

Since the start of the year, Facebook parent Meta is down 41.4 percent, Tesla is off 36.3 percent and Microsoft is down 16.3 percent, while Apple and Google’s parent Alphabet are both down 12.9 percent.