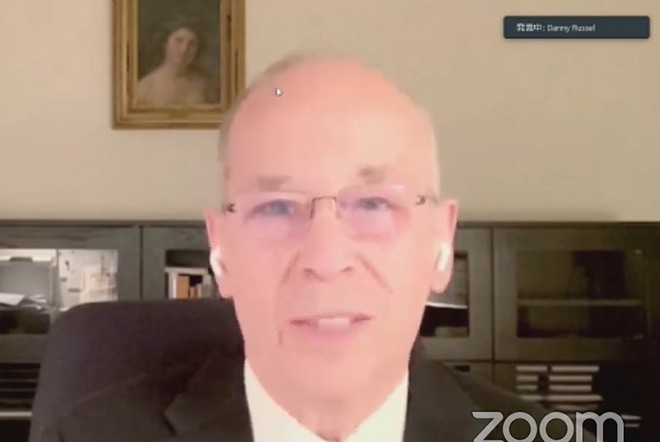 A “deepening U.S.-China conflict” is the biggest threat to peace in Northeast Asia in 2022, according to a survey of 201 diplomacy and security experts in Japan, the United States, China and South Korea.

“North Korea as a nuclear power” was picked as the second largest risk to the region in the survey conducted by Genron NPO, a Tokyo-based nonprofit organization, and other groups in January and February this year.

The results were announced on Feb. 22 at the Asia Peace Conference 2022 symposium held online by Genron NPO.

A “battle for digital hegemony between the U.S. and China” ranked third, and “securitization of economic issues and fragmented supply chains” came in sixth place.

The fourth most serious threat to peace in Northeast Asia was “occurrence of accidents in the Taiwan Strait,” while “potential for an emergency over Taiwan” was eighth, the survey showed.

Among Japanese experts only, “continued increase of Chinese military power” was chosen as the biggest threat.

U.S. experts picked “occurrence of accidents in the Taiwan Strait” as the most significant risk.

China and South Korean respondents both chose “deepening U.S.-China conflict” as the No. 1 threat.

“You can’t say that a crisis similar to the one that is happening in Ukraine will definitely not occur in Northeast Asia,” Yasushi Kudo, head of Genron NPO, said at the Feb. 22 conference. “An escalation of tensions between the U.S. and China, including the Taiwan issue, is posing a risk to a wide range of areas.”

He said at the symposium that two states see their own actions as reactive and defensive while the other side’s actions are viewed as aggressive and threatening.

“Each side reacts to the other’s military behavior and military capability with alarm and believes it has to respond with a show of resolve and superior force as a deterrent,” Russel said. “This syndrome drives the bilateral relationship in a negative spiral as each state’s actions increase the anxiety of the other.

“The actions that each side takes to increase its own security has the effect of pushing the situation closer to a crisis.”