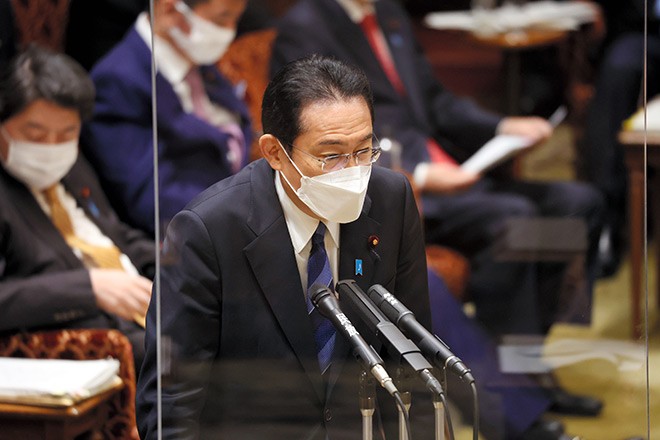 “This invasion by Russia has rocked the foundation of the international order that rejects changing the existing conditions unilaterally and by force,” Kishida told reporters.

The prime minister added that Japan “strongly denounces Russia and will work together with the international community including the United States to immediately respond to the (crisis).”

After news of the invasion broke, Kishida left a meeting of the Upper House Budget Committee at around 2:35 p.m. on Feb. 24. He trotted down the stairs in the Diet building, got in a car waiting at the entrance and headed to the prime minister’s office.

At around 3 p.m., the central government held a National Security Council meeting to analyze the Ukrainian situation and discuss Japan’s response to the Russian attack.

Kishida later reiterated his earlier statement during an Upper House Budget Committee meeting, making it clear that Japan condemns the action by Russia as “an invasion.”

Kishida said at the committee meeting that he was briefed about the crisis from related ministries and agencies during the NSC meeting.

“It is a highly charged situation,” Kishida said. “I gave instructions to ensure the safety of Japanese nationals living in Ukraine as much as possible and collect more detailed information and get to the bottom of the situation.”

Chief Cabinet Secretary Hirokazu Matsuno at a news conference on the afternoon of Feb. 24 said the government "has yet to receive any information that the lives and health of Japanese nationals living in Ukraine have been harmed."

On Feb. 23, Kishida announced that Japan will halt issuing visas to people related to the Ukrainian regions that Russia unilaterally recognized as independent, and freeze their assets.

According to Hayashi, there were about 120 Japanese nationals in Ukraine as of Feb. 21.

The government “has chartered a plane in neighboring countries and made various preparations” to evacuate them, Hayashi said.

RISK OF CYBERATTACKS, IMPACT ON TRADE

Matsuno said at a news conference on the morning of Feb. 24 that the Ministry of Economy, Trade and Industry has sent a wake-up call to the business community to “strengthen measures against the threat of cyberattacks one more time” in the wake of Russia’s attack on Ukraine.

The Ukrainian government and banks in Ukraine have become a target of distributed denial-of-service (DDoS) attack, and other countries have faced a growing risk of becoming a target as well.

“The related ministries and agencies need to work together closely and ensure safety on cybersecurity,” Matsuno said.

As of Feb. 23, the Financial Services Agency issued a warning to financial institutions nationwide to strengthen cybersecurity measures to lower the risk of their financial systems becoming targets of cyberattacks.

The warning did not mention a country by name but it said, “Considering the current circumstances, the potential risk of cyberattacks is growing.”

The agency urged financial institutions to strengthen password and authentication systems and review the process of early detection and restoration procedures in the event of a cyberattack.

Because the United States and countries in Europe have issued economic and financial sanctions against Russia over the Ukraine situation, the agency said it has worked closely with major domestic banks to check financial transactions with Russia.

A major bank senior representative said, “We need to change the existing route that has been used for payments.”

The representative said Japan and Russia have had a significant trade relationship, particularly over resources.

“We need to keep paying attention to the impact on that aspect,” the representative said.