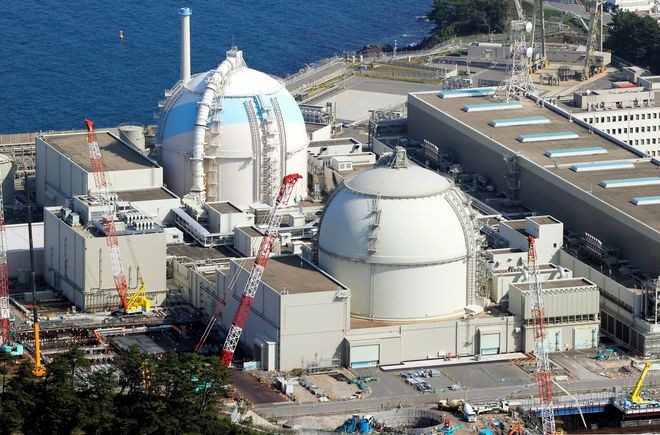 Japan’s leading power companies decided to transfer ownership of tons of plutonium stored in Britain and France for reprocessing in a quest to reduce the stockpile as quickly as possible.

The plan was unveiled Feb. 18 by the Tokyo-based Federation of Electric Power Companies of Japan (FEPC). The recycling program will allow operators of pluthermal generation facilities to use plutonium produced by other utilities.

Japan has nearly 40 tons of plutonium in storage, fueling international concerns over its potential for use in nuclear weapons.

Major utilities in Japan commission facilities in Britain and France to extract plutonium from spent nuclear fuel produced at atomic power plants in this country. It is processed into mixed-oxide (MOX) fuel for reuse at domestic nuclear plants.

Japan’s plutonium stockpiles in Britain and France totaled 21.8 tons and 15.4 tons, respectively, as of December 2020. Britain shut down its only MOX plant in 2011, which means it can no longer reprocess plutonium.

As a result, and for accounting purposes, pluthermal operators such as Kyushu Electric Power Co. will exchange their plutonium reserves in Britain for the stockpile in France for use by Tokyo Electric Power Co. and other utilities that have yet to introduce pluthermal generation. The plutonium will then be reprocessed and imported back to Japan.

As a first step, 700 kilograms of plutonium will come under the ownership transfer program for use in fiscal 2026 at the No. 3 reactor of Kyushu Electric’s Genkai plant in Saga Prefecture.

The FEPC anticipates that pluthermal power production will be in service in at least 12 reactors across Japan by fiscal 2030.

For that reason, utilities have not managed to drastically reduce the volume of stored plutonium.

A reprocessing facility operated by Japan Nuclear Fuel Ltd. in Rokkasho, Aomori Prefecture, to recover plutonium from spent nuclear fuel is scheduled for completion in the first half of fiscal 2022.

But there are fears the treatment plant will not start full-scale operations to stop plutonium from accumulating further. With that in mind, the FEPC began considering how to reduce the amount of stockpiled plutonium.