EDITORIAL: Russia’s invasion of Ukraine a blatant attack on the world order 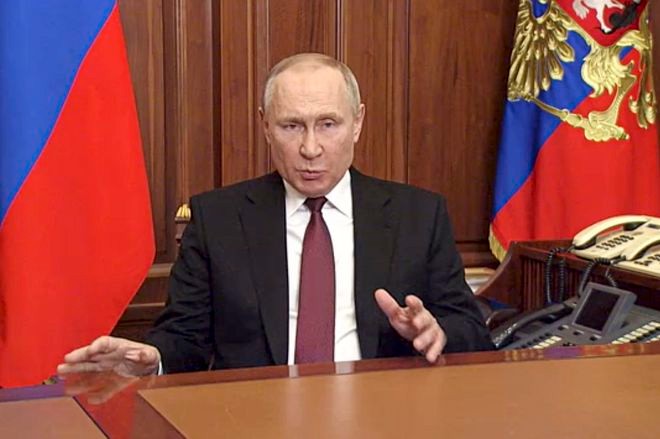 Russian forces attacked not just eastern parts of the nation, which have been plagued by conflict for eight years, but also areas around Kyiv, the capital. Russian troops are reported to be advancing into various parts of Ukraine.

Russia’s invasion of Ukraine is a clear and brutal violation of Ukraine’s sovereignty. It is an outrageous and unpardonable assault on the very foundation of the world order that has been in place since the end of World War II.

Russia is a permanent member of the U.N. Security Council and is also a nuclear superpower. This blatant violation of international law by this powerful nation is bound to have immense repercussions on the entire world.

Moscow’s act of war should be regarded as a serious challenge to the norms and values of not just Europe but the entire global community. Countries need to stand against Russia in unity and provide support to Ukraine.

It is really distressing to imagine the fate of innocent Ukrainian citizens who are suffering from the Russian attacks. Japan and other members of the international community should act swiftly to stop the conflict to limit the bloodshed.

World War II started in 1939 when Nazi Germany invaded Poland. One of the pretexts cited for the invasion was the protection of Germans in Poland. There are some parallels between the German invasion of Poland and the Russian aggression against Ukraine.

In a speech to declare the start of a “special military operation” in Ukraine, Russian President Vladimir Putin claimed that the operation would aim for the “demilitarization” of the country to protect Russians there. But there is no doubt that his real aim is to topple the country’s pro-Western government.

This is the largest invasion in Europe since the Nazi aggression. Putin’s anachronistic speech ignores the history since the devastation of the world war and the peaceful international order defined by the U.N. Charter.

Moscow’s arrogant claim that Ukraine was created by Russia and therefore belongs to Russia can never hold water under international law. One basic principle that has been upheld by the postwar world stipulates that all sovereign nations, regardless of their size, should have equal rights.

Russia, which as a victor in World War II has a permanent seat on the Security Council, should act as a guardian of this and other basic principles of the world. But it has abdicated its responsibility as it has unleashed war on Ukraine.

RECKLESS ACT BORN OUT OF AUTOCRACY

Putin believes his unilateral military operation to attack another country can be justified because of the need to reduce what he deems an unfair security threat posed to Russia by the United States and Europe. His wrong-headed sense of privilege seems to reflect the political situation in Russia.

Political forces critical of the Putin administration have been driven out of the parliament, the Federal Assembly, and many journalists and political activists opposed to his leadership have been attacked and assassinated. The judiciary is also under the Kremlin’s thumb with regard to political cases.

Despite its semblance to a system of checks and balances among the three branches of the government, the Russian political regime has become a dictatorship during the more than 20 years under Putin’s power and control. Many Russian citizens are reportedly unwilling to support this war. But there is no way for them to stop his reckless military adventure.

Many observers say Putin very much loathes seeing Ukraine develop closer ties with the West because of the fear that stronger influence on the neighbor from Western democracies could threaten his rule in Russia.

From this point of view, the Russian invasion of Ukraine has trampled not only on the country’s sovereignty but also on the world’s freedom and democracy. It should also be recognized clearly as a grim reminder of the serious risk posed to the world today by a proliferation of authoritarian rules in recent years.

U.S. President Joe Biden has announced economic sanctions against Russia. But it is unclear how effective these measures will be in containing Putin’s military adventure. The invasion has had the effect of highlighting a decline in the U.S. might as the principal guardian of the world order.

The global framework of security is showing increasing signs of undergoing a transition. For a time immediately after the end of the Cold War with the collapse of the Soviet Union three decades ago, the United States was touted as the only remaining superpower that ruled in a mono-polar world.

Over time since then, however, the United States has become increasingly more focused on its own interests as it has gone through the Iraq War and the global financial crisis triggered by the 2008 collapse of U.S. investment bank Lehman Brothers.

Now, pundits are talking about a non-polar world without any dominant power with the ability and the will to act as the policeman of the world.

Russia’s aggressive attitude is echoed in the increasingly assertive behavior of China, which seems to be poised to launch a major challenge to the existing world order driven by its own victim mentality stemming from history.

In reality, both China and Russia have grown by capitalizing on the benefits of economic globalization. But they have been showing a growing propensity to act in ways that indicate disregard for the value of this system of mutual benefits.

The reality is that no country can emerge as a winner by taking self-centered actions that deviate wildly from the international norm. To ensure sustainable development of the world, the international community needs to make serious efforts to bring Russia to reason.

The international community has every reason to impose stringent sanctions against Russia in response to its invasion of Ukraine. NATO should prepare for emergency responses to the situation to minimize civilian casualties.

At the same time, it would not be wise for the world to give up diplomatic efforts to persuade Russia into halting its military operation. In addition to short-term negotiations for a ceasefire, major powers should also set out on a joint quest to build a new global security framework preferably backed by a fresh round of negotiations for long-term arms control.

Japan, for its part, has a duty to contribute to maintaining international principles, including the rule of law, in the Asia-Pacific region. Tokyo should stand up resolutely against Russia’s invasion of its neighbor in part to send a strong message to China that it would seriously undermine the interests of both itself and the region if it embarks on a unilateral action to change the status quo by force.

The world should not be allowed to return to the old era when leading powers jockeyed for hegemony in a dog-eat-dog game of power. Now that it is impossible to rely on one specific superpower to maintain the world order, nations need to work together to build a new order maintained not by power but by rules.

Cooperation for emergency responses to the Russian invasion is a good place to start.