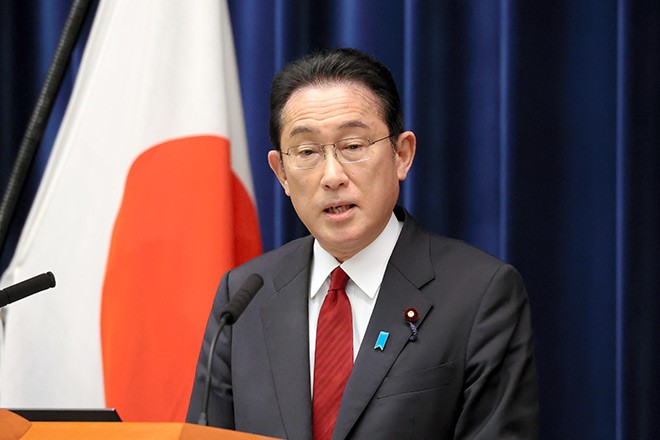 Prime Minister Fumio Kishida on Feb. 25 announced a further set of sanctions against Russia and repeated his condemnation of Moscow’s invasion of Ukraine.

“This issue cannot be overlooked from the standpoint of Japan’s own national security,” Kishida said at a hastily called news conference. “We will strongly call for abiding by international law and the immediate withdrawal of Russian troops while working closely with the international community, including the Group of Seven.”

Japan two days earlier announced sanctions against Russia for its unilateral recognition of the independence of regions in eastern Ukraine.

Russian forces then bombed and invaded Ukraine on Feb. 24.

Kishida said that Japan will freeze assets going to individuals and companies in Russia, suspend the issuing of visas to Russians, and impose export restrictions on semiconductors and other general-purpose products.

Assets going to Russian financial institutions will be frozen, he said.

The prime minister also announced expedient restrictions on exports to Russian organizations with links to the military as well as items on restriction lists agreed to internationally.

Kishida said measures had already been taken to secure the safety of the 120 or so Japanese nationals in Ukraine.

“We have set up an emergency liaison office in Lviv in western Ukraine to provide support for those seeking to evacuate over land to neighboring Poland,” Kishida said. “The Polish government is planning to cooperate by smoothly accepting Japanese nationals, and we have already made arrangements for a charter flight to transport those nationals from Poland to another nation.”

The prime minister also touched upon planned measures in Japan to deal with the expected spike in oil prices on the global market as sanctions could affect Russian petroleum exports.

Kishida said measures to guard against a drastic increase in fuel prices would be expanded to limit rises in retail prices.

Other measures will be taken to support small businesses as well as the different industrial sectors and local regions that will adopt their own steps to deal with higher fuel costs.

“We will also implement measures to prevent a sharp rise in electricity and gas rates, even if fuel costs do increase,” Kishida said.