Japanese firms trying to secure safety of workers in Ukraine 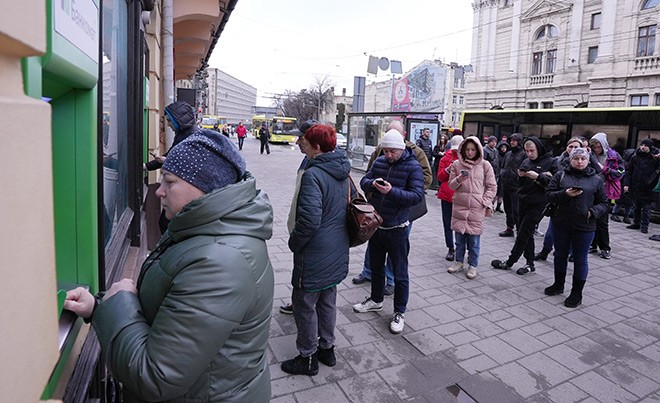 Japanese companies with bases in Ukraine were scrambling to determine if their workers were safe after Russian forces attacked various parts of the nation on Feb. 24.

According to Teikoku Databank Ltd., 57 Japanese companies operate in Ukraine, including 28 in the manufacturing sector and 16 trading companies.

Japan Tobacco Inc. employs about 900 local workers at a Ukrainian plant that produces the Camel brand of cigarettes for the Japanese market.

Non-Ukrainian employees had left the nation by mid-February, according to company officials. They said the plant was operating as of Feb. 22, but they do not know what has happened since then.

Sales in Eastern Europe, including Russia and Ukraine, account for about 20 percent of Japan Tobacco’s profits.

Masamichi Terabatake, the company president, said sales could drop by as much as half in the region if the situation in Ukraine worsens.

On the day of the Russian invasion, Toyota Motor Corp. said it was asking Sumitomo to suspend sales there for two days. Sumitomo’s workers in Ukraine are being asked to stay at home for their safety.

Most of the Japanese companies with bases in Ukraine told The Asahi Shimbun that their Japanese staff and their families had already left the nation.

Hitachi Ltd. in July 2021 acquired GlobalLogic Inc., an American information technology company, for about 1 trillion yen ($8.7 billion). The company’s development base in Ukraine has about 7,200 employees.

Hitachi officials said that for safety concerns, they could not comment on whether those workers had evacuated.

Rakuten Group Inc. has a base in Odessa in southern Ukraine that handles messaging apps and advertising. About 130 local staff members work there.

A Rakuten Group official said the company was trying to confirm the local situation as well as the safety of the workers.

Other companies also said their top priority was protecting the safety of their workers in Ukraine.

(This article was written by Hideaki Sato, Kenji Izawa and Yuji Yamashita.)