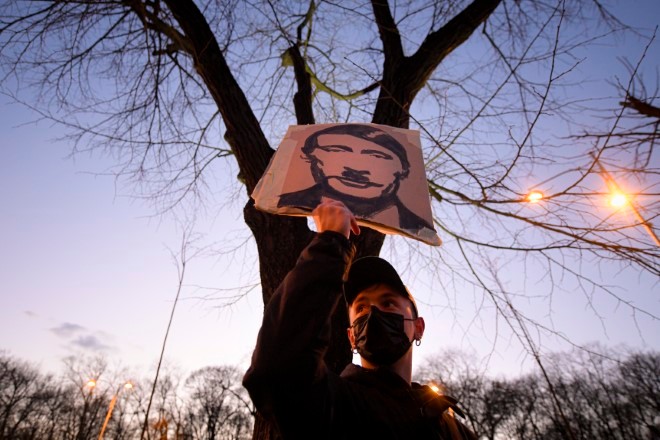 A man holds a placard depicting Russian President Vladimir Putin as Adolf Hitler during a protest against the Russian invasion of Ukraine in front of the Ukrainian embassy in Bucharest, Romania, Feb.24, 2022. (AP Photo)

Twenty million dollars in U.N. humanitarian funds, and a planned infusion of 1.5 billion euros ($1.68 billion) in EU economic aid for Ukraine. A raft of new, stronger sanctions against Russia from Japan, Europe, Australia, Taiwan and others. And a cascade of condemnation from the highest levels.

As Russian bombs and troops pounded Ukraine during the invasion’s first full day, world leaders on Friday began to fine-tune a response meant to punish the Russian economy and its leaders, including President Vladimir Putin’s inner circle.

While there’s an acute awareness that a military intervention is unlikely, for now, the strength, unity and speed of the financial sanctions--with the striking exception of China, a strong Russian supporter--signal a growing global determination to make Moscow reconsider its attack.

France and its European allies have decided to “inflict very severe blows on Moscow,” further sanctioning individuals, as well as penalties targeting finance, energy and other sectors, French President Emmanuel Macron said Friday. The legal texts for the sanctions will be finalized and submitted for approval to EU foreign ministers later Friday.

Macron also said that the EU has decided on economic aid for Ukraine in the “unprecedented” amount of 1.5 billion euros ($1.68 billion).

Russia’s civil aviation authority has banned U.K. flights to and over Russia in retaliation to the British ban on Aeroflot flights. Rosaviatsiya said that all flights by the U.K. carriers to Russia as well as transit flights are banned starting Friday.

It said the measure was taken in response to the “unfriendly decisions” by the British authorities who banned flights to the U.K. by the Russian flag carrier Aeroflot as part of sanctions over Russia’s invasion of Ukraine.

Countries in Asia and the Pacific have joined the United States, the 27-nation European Union and others in the West in piling on punitive measures against Russian banks and leading companies. The nations have also set up export controls aimed at starving Russia’s industries and military of semiconductors and other high-tech products.

“Japan must clearly show its position that we will never tolerate any attempt to change the status quo by force,” Prime Minister Fumio Kishida told reporters Friday while announcing new punitive measures that included freezing the visas and assets of Russian groups, banks and individuals, and the suspension of shipments of semiconductors and other restricted goods to Russian military-linked organizations.

“Russia’s invasion of Ukraine is an extremely grave development that affects the international order, not only for Europe but also for Asia,” Kishida said.

The moves follow Russia’s full-scale invasion of Ukraine. Putin’s forces conducted airstrikes on cities and military bases, and his troops and tanks rolled into the nation from three sides. Ukraine’s government pleaded for help as civilians fled. Scores of Ukrainians, civilians and service members alike, were killed.

“An unthinkable number of innocent lives could be lost because of Russia’s decision,” New Zealand Prime Minister Jacinda Ardern said. She announced targeted travel bans against Russian officials and other measures.

At the United Nations, officials set aside $20 million to boost U.N. humanitarian operations in Ukraine. Separately, the U.N. Security Council is expected to vote Friday on a resolution condemning Russia and demanding the immediate withdrawal of all its forces. Moscow, however, is certain to veto it.

U.N. humanitarian chief Martin Griffiths said the $20 million from the U.N.’s Central Emergency Response Fund will support emergency operations along the contact line in eastern Donetsk and Luhansk and in other areas of the country, and will “help with health care, shelter, food, and water and sanitation to the most vulnerable people affected by the conflict.”

The West and its allies have shown no inclination to send troops into Ukraine--a non-member of NATO--and risk a wider war on the continent. But NATO reinforced its member states in Eastern Europe as a precaution against an attack on them, too.

The European Union Aviation Safety Agency extended to 200 nautical miles the airspace it considers risky and warned of “the threat of missile launches to and from Ukraine.”

Protests by Ukrainians and their supporters were planned Friday across Asia. Public buildings, sports stadiums and landmarks in the Australian city of Melbourne were illuminated in Ukraine’s national colors of blue and yellow.

Japan’s new sanctions follow an earlier set of measures that include the suspension of distributing and issuing new Russian government bonds in Japan--a move aimed at cutting funding for Russia’s military--a trade ban with two Ukrainian separatist regions and the freezing of their assets and visas.

Japan, which has long sought to regain control of Russian-held northern islands seized at the end of World War II, took a milder stance toward Moscow during Russia’s 2014 Crimea annexation. Tokyo’s response to the current invasion has been considered tougher and faster, something that may be linked to a deep worry in Tokyo over China’s increasingly assertive military actions in the region.

South Korea’s comparative caution is likely because its economy is heavily dependent on international trade. It also worries that strained ties with Moscow could undermine efforts to resolve the North Korean nuclear crisis. Russia is South Korea’s 10th largest trading partner, and Moscow is a veto-wielding member of the U.N. Security Council and maintains friendly ties with North Korea.

Indian Prime Minister Narendra Modi phoned Putin late Thursday and appealed for an “immediate cessation of violence,” his office said in a statement.

The cautious statement reflects India’s delicate position. It relies heavily on Russia, a historic partner, for military equipment but has sought to strengthen ties with the West over the years.

Taiwan announced Friday that it would join in economic sanctions against Russia, although it did not specify what type of measures those would be. Sanctions could potentially be focused on export control of semiconductor chips, local media reported. Taiwan is the dominant manufacturer of such chips, a critical component used in technologies from cars to laptops to cellphones.

While most nations in Asia rallied to support Ukraine, China has continued to denounce sanctions against Russia and blamed the United States and its allies for provoking Moscow. Beijing, worried about U.S. power in Asia, has increasingly aligned its foreign policy with Russia to challenge the West.

“You don’t go and throw a lifeline to Russia in the middle of a period when they’re invading another country,” he added, referring to a report in The South China Morning Post that China had announced it was fully open to Russian wheat imports.

“We would very much welcome that China will exercise its connection with Russia and talk to Putin and explain to him it is inappropriate in the 21st century to do this massacre in Europe,” Ambassador Sergiy Korsunsky told reporters.