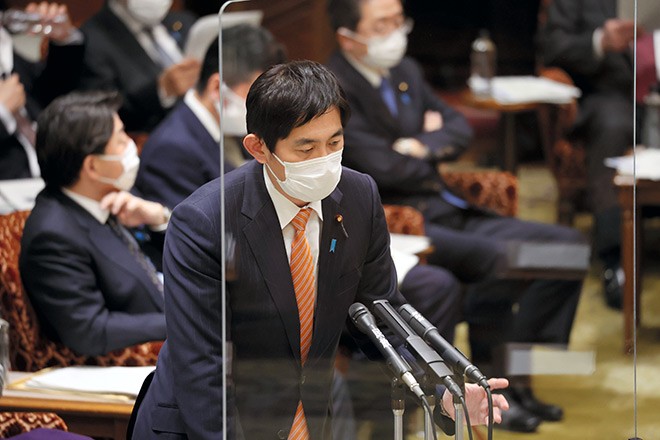 Takayuki Kobayashi, the state minister in charge of economic security, responds to a question at the Feb. 25 session of the Upper House Budget Committee. (Koichi Ueda)

The government OK’d a bill to promote economic security that would ensure a steady supply of strategically important goods such as semiconductors and submitted it to the Diet for approval on Feb. 25.

Critics contend it would hand the government too much say in how companies go about their business.

The proposed legislation, which reflects a key policy area for the Kishida administration, gained Cabinet approval earlier in the day. It is designed to protect sensitive advanced technology from leaking overseas as well as to guard against cyberattacks against Japanese companies.

“This will eliminate Japan’s inherent weakness (in this field) compared with other nations and secure its strength in the international community,” Takayuki Kobayashi, the state minister in charge of economic security, said at a Feb. 25 news conference.

The legislation covers four key areas: strengthening supply chains for key materials and parts, such as semiconductors; government oversight in the installation of vital equipment and computer systems in core infrastructure to guard against cyberattacks; encouraging research and technological cooperation between the private and public sectors; and securing sensitive technological information in patents.

Government support would be provided to companies that build new plants to manufacture materials and parts designated as vital under the law.

Among areas being considered for inclusion are semiconductors, pharmaceuticals, rare earth metals and large-capacity batteries.

Fourteen industrial sectors will be covered by the government assessment program prior to installing parts and equipment.

Companies will be obliged to demonstrate to the government they have taken sufficient precautions against cyberattacks because they will not be using foreign-made equipment.

They will also have to submit their factory blueprints. Failure to do so allows for penalties of up to two years imprisonment or a maximum fine of 1 million yen ($8,650).

The provisions have sparked concern the law could infringe on private-sector economic activity because it would give the government authority to evaluate corporate plans beforehand.

Companies to be covered by the requirement to submit installation plans will be determined by standards to be subsequently decided by Cabinet order.