China is Russia’s best hope to blunt sanctions, but wary 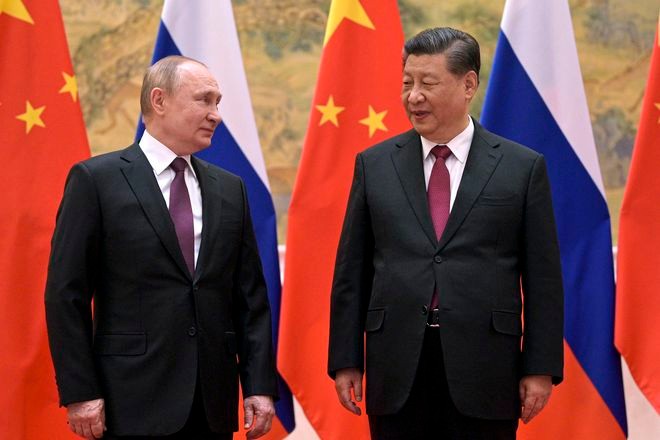 Chinese President Xi Jinping, right, and Russian President Vladimir Putin talk to each other during their meeting in Beijing on Feb. 4. (Sputnik, Kremlin Pool Photo via AP, File)

BEIJING--China is the only friend that might help Russia blunt the impact of economic sanctions over its invasion of Ukraine, but President Xi Jinping’s government is giving no sign it might be willing to risk its own access to U.S. and European markets by doing too much.

Even if Beijing wanted to, its ability to support President Vladimir Putin by importing more Russian gas and other goods is limited.

Relations with Moscow have warmed since Xi took power in 2012, motivated by shared resentment of Washington, but their interests can conflict. While their militaries hold joint exercises, Putin is uneasy about the growing Chinese economic presence in Central Asia and Russia’s Far East.

“China-Russia relations are at the highest level in history, but the two countries are not an alliance,” said Li Xin, an international relations expert at the Shanghai University of Political Science and Law.

In response to the invasion, Washington, Britain, the 27-nation European Union and other Western allies have announced or promised sanctions against Russian banks, officials, business leaders and companies, as well as export controls aimed at starving Russia’s industries and military of high-tech products.

Xi’s government might support Putin within those limits — and Chinese companies might use the situation to pursue better deals — but will balk at openly violating sanctions and being targeted for penalties, experts said.

“China doesn’t want to get so involved that it ends up suffering as a result of its support for Russia,” said Mark Williams, chief Asia economist for Capital Economics.

Chinese trade with Russia rose to $146.9 billion last year, but that is less than one-tenth of China’s total $1.6 trillion in trade with the United States and European Union.

“It all hinges on whether they’re willing to risk their access to Western markets to help Russia, and I don’t think they are,” said Williams. “It’s just not that big a market.”

China, the world’s second-largest economy, is the only major government not to have condemned the invasion.

“The degree of Chinese support Russia receives is likely to prove a crucial factor in how well it can weather the long-term consequences,” wrote Kevin Rudd, a former Australian prime minister and president of the Asia Society, on the Asia Society website.

China’s multibillion-dollar purchases of Russian gas for its energy-hungry economy have been a lifeline for Putin following trade and financial sanctions imposed in 2014 over his seizure of Crimea from Ukraine.

Putin’s government has spent the past decade trying to expand exports to the Far East to reduce reliance on European markets. Moscow and Beijing both are trying to de-dollarize, or use the U.S. currency less in trade, to reduce their exposure to the American financial system and official pressure.

China bought one-sixth of Russia’s total exports last year and two-thirds of that was oil and gas, according to Rajiv Biswas, chief Asia-Pacific economist for IHS Markit.

“China will be an important growth market for Russian energy exports,” Biswas said.

Beijing has shown its self-interest by using pressure on Moscow from the 2014 sanctions as leverage to negotiate lower gas prices in an earlier contract.

“We will not take advantage of others’ difficulties,” said Li. “But as an economic entity, Chinese companies will strive for the maximum gains with the possible lowest costs.”

“We demand that relevant parties should not damage the legitimate rights and interests of China and other countries,” said the spokesman, Wang Wenbin.

Also this week, China announced it would allow imports of wheat from all parts of Russia for the first time. That cannot replace all lost gas revenue if Europe stops buying but could help to buoy incomes of Russian farmers.

Still, that announcement came with a warning that looms as a potential obstacle: Shipments must be kept free of a fungus that led China earlier to avoid Russian wheat.

Moscow also might have undercut Beijing’s willingness to help by launching its invasion after Xi endorsed Russian complaints about security and the expansion of the NATO military alliance in a statement with Putin last month.

Xi’s government has tried to distance itself from the attack by urging respect for national sovereignty, which Foreign Minister Wang Yi said last weekend includes Ukraine.

While trade deals will go ahead, “China will not side with Russia over its invasion of Ukraine,” said Zhang Lihua, an expert on Chinese-European relations at Tsinghua University in Beijing.

China’s relations with Washington and Europe already are strained by complaints about Beijing’s technology ambitions, market access, human rights, Hong Kong and Chinese claims to disputed seas and territory in the Himalayas.

China is accused by the United States and its allies of helping Iran and North Korea evade sanctions, but the scale of violations and penalties have been limited.

Beijing says it complies with a U.N. ban on most trade with North Korea over its nuclear weapons development. But China has been accused of failing to enforce that fully for fear of causing an economic collapse and a refugee crisis on its border.

Chinese-flagged ships are suspected of taking oil to North Korea and exporting its coal, though it isn’t clear whether that has approval from Chinese leaders. North Korea is accused of using Chinese brokers to launder stolen cryptocurrency.

Except for tech giant Huawei Technologies Ltd., which was accused of trading with Iran, Chinese violators are small and have few foreign activities that are vulnerable to sanctions.

Western anger over Putin’s attack on Ukraine is more intense, suggesting governments will watch closely and enforcement will be more stringent.

Beijing has criticized U.S. threats to impose “secondary sanctions” that hit not just companies or banks dealing with North Korea but their customers and business partners. If Washington were to carry out such secondary sanctions in relation to Ukraine, there would be little China could do to protect state-owned banks and other companies with operations in foreign economies.

Some Chinese oil and gas companies with Russian partners were hurt by earlier sanctions on Moscow, Li said.

“This is what Chinese companies are worried about,” Li said.