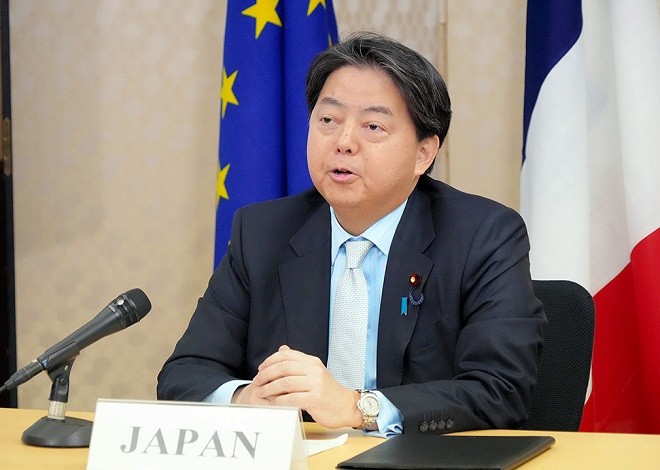 Foreign Minister Yoshimasa Hayashi at a ministerial meeting of the Indo-Pacific region on Feb. 22. (Provided by the Foreign Ministry)

Japan said it is weighing its response to global moves to punish Russia for its invasion of Ukraine by further isolating the country from international banking transactions.

Foreign Minister Yoshimasa Hayashi was referring to a decision by the European Commission and Group of Seven nations to remove certain Russian banks from the SWIFT financial messaging system.

“Ukraine has made an official request for Japan to take a similar action,” Hayashi said Feb. 27 during a news program aired by public broadcaster Japan Broadcasting Corp. (NHK). “Japan will make a response while closely monitoring the effects on financial markets.”

The European Commission, along with the United States, Britain, Canada, France, Germany and Italy, announced the punitive economic measure in a joint statement on Feb. 26.

On Feb. 27, Ukraine’s ambassador to Japan, Sergiy Korsunsky, voiced his country’s earnest hopes on his Twitter account that Tokyo will fall in step with the actions to be taken by the European Union and G-7 nations.

During the program, Hayashi underlined the importance for Japan of making a coordinated response with the international community to Russia’s invasion.

He took note of views expressed by some experts that Russian President Vladimir Putin’s decision to resort to military force against Ukraine could prove to be a turning point for the world in the long-term.

“It is crucial for Japan to work together with the global community in making strenuous efforts as a deterrent to a similar situation arising in Asia in the future,” he added.

His comment was widely taken to refer to China’s maritime behavior around the Taiwan Strait and elsewhere in the region.