Kishida puts Ukraine ahead of Russia talks on disputed isles 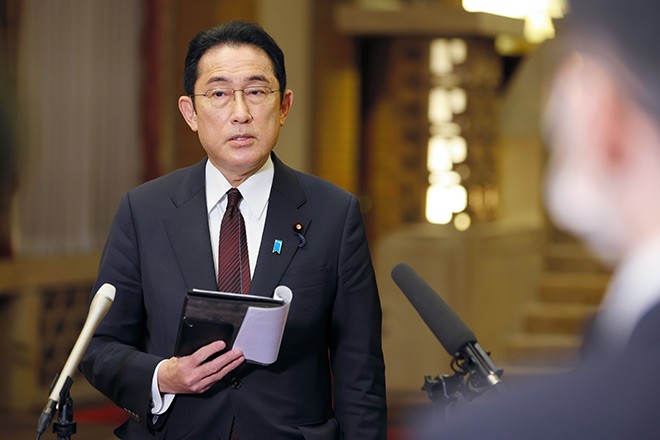 Prime Minister Fumio Kishida tightened Tokyo’s alignment with the West at the risk of deteriorating relations with Moscow by announcing that Japan will also remove certain Russian banks from the SWIFT financial messaging system.

Kishida also stated on Feb. 27 that Japan will freeze assets owned by Russian President Vladimir Putin and other Russian government officials over the country’s invasion of Ukraine.

“Now is the time when we have to take united actions to protect the foundation of international order,” Kishida said. “Japan will show the fact that those who commit such outrageous acts will be forced to make huge sacrifices.”

SWIFT, which stands for the Society for Worldwide Interbank Financial Telecommunication, is used by more than 11,000 financial institutions around the world to foster fast cross-border payments.

Excluding Russia from SWIFT is expected to have a serious impact on the Russian economy.

Tokyo had previously tried to avoid taking any measure that could anger Russia so that negotiations could continue over the return to Japan of the Northern Territories, four islands off Hokkaido that were seized by Soviet forces at the end of World War II. The territorial dispute has prevented Japan and Russia from signing a peace treaty.

But Kishida has made clear his condemnation of the Russian invasion of Ukraine.

“When we look at what is happening now, we are not in a position to say anything about the outlook for (Japan-Russia) peace treaty negotiations and other matters,” Kishida said. “We can no longer keep our relationship with Russia as we did before.”

Japanese financial institutions and corporations that do business with Russia scrambled to collect information on how Japan’s SWIFT decision will affect payment transactions and money-raising efforts in Russia.

But they said they cannot give any specific predictions because they do not know which Russian financial institutions will be excluded from SWIFT.

“The sanction brings the risk of barring communications between Japanese companies’ headquarters and affiliated companies in Russia as well as blocking payment transactions, such as remittances,” a megabank official said.

If payment transactions are delayed for imports of crude oil and natural gas from Russia, energy prices might soar further, and the higher costs could be passed on to households.

“The longer the sanction continues, the more badly it will affect the economies of Japan and the West,” a trading firm official said.