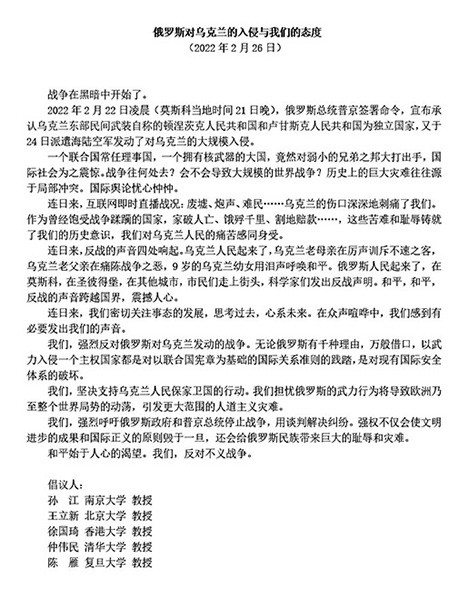 A joint statement by five Chinese historians on “Russia’s invasion of Ukraine and our stance,” which was released on social media (Takashi Funakoshi)

BEIJING--Five Chinese academics posted a joint statement on the WeChat social media app calling on Russian President Vladimir Putin to halt the war against Ukraine, but the text was later removed and became unviewable.

Beijing does not recognize Moscow’s military action as “aggression” and supports its position against the expansion of NATO.

The professors did not comment on the Chinese government’s stance in their statement, but it was removed by WeChat over suspected violations of management rules concerning internet services.

However, images of the statement went viral and won high praise even after it was deleted.

The statement, titled “Russia’s invasion of Ukraine and our stance,” was released on the afternoon of Feb. 26, two days after the invasion began.

Sun told The Asahi Shimbun that he drafted the statement and released it after winning the approval of the others.

In the statement, they said the “international community was stunned by Russia’s aggression because a nuclear power and a permanent member of the U.N. Security Council went on a rampage against a brother, a weaker country.”

It also said the authors “felt the need to voice our opinion while we are aware that there are diverse opinions” on Moscow’s action.

“We are strongly opposed to the war Russia started against Ukraine,” the statement read. “The aggression against a sovereign nation with the use of force is tantamount to destroying the existing international security system no matter what Russia says about the reasons for doing so.”

The academics called on the Russian government and Putin to “stop the war” and to “resolve the conflict through talks.”

But Wang also showed an understanding to Moscow’s position: “The legitimate security concerns of all countries should be respected. Given NATO’s five consecutive rounds of eastward expansion, Russia’s legitimate security demands ought to be taken seriously and properly addressed.”

Beijing has been cautious about how it labels Russia’s actions in Ukraine.

Asked if Russia’s military action constitutes aggression, Hua Chunying, a spokeswoman with the Chinese Foreign Ministry, said on Feb. 24, “We are not going to rush into a conclusion.”