GOHAN LAB/ Sweet and sour stir-fry of meatballs and vegetables: Harmony of sweetness and sourness is always popular 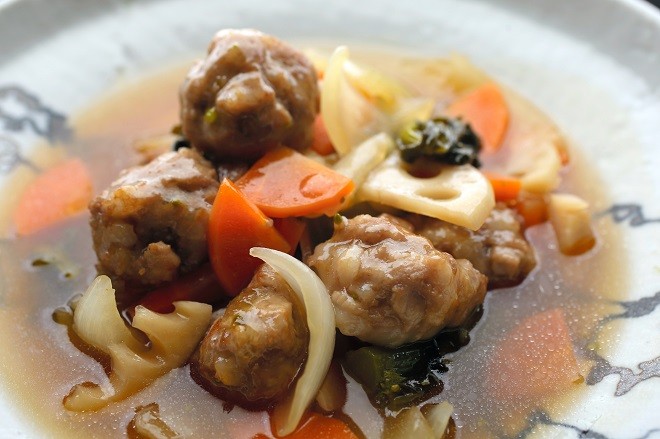 As represented by such dishes as sweet and sour pork, known as “subuta” in Japan, and chili shrimp, sweet and sour flavoring is a staple of Chinese cuisine.

The third in the series on popular dishes focuses on “sweet and sour stir-fry of meatballs and vegetables,” where a generous use of vegetables brings out the flavor of the meat.

The ground meat in the meatballs helps them retain their shape while the addition of chopped pork loin gives them texture. By mixing the meat with seasonings before adding katakuriko starch, the flavor will spread evenly and nicely.

By pan-frying the meatballs in an extra amount of oil before combining them with the vegetables, you can fuse in the umami and are more likely to keep the meatballs from falling apart.

The term “sweet and sour” is “tangcu” in Chinese. In Italian it is “agrodolce” while it is “aigre-doux” in French, showing that it is a taste liked in Asia as well as Europe.

Research has shown that people favor sweet and sour more than simply sweet.

“Fondness of sweet and sour seems to be shared by mankind,” says Sho Ishii of the Mizkan Group Corporation Central Research Institute.

2. Cut pork loin into dices 5 mm on a side, place in bowl with ground pork. Add a pinch of salt, bit of white pepper, 1 Tbsp sake and mix. Add 1 tsp katakuriko starch and mix further (PHOTO A). Makes 8 meatballs that are 3 cm in diameter (PHOTO B).

4. Pour 300 ml water in frying pan, place on high heat and stir-fry meatballs and vegetables. When pan comes to a boil, lower to medium heat and simmer with lid for 2 minutes. Add seasonings, simmer for 1 minute on high heat and turn off heat. Add katakuriko starch mixed with water (1 tsp katakuriko and 2 tsp water) and mix. Place on heat again and when it comes to a boil, add 1 tsp sesame oil in a circular motion.

Sourness, which people often associate with immature fruit, is a taste not favored on its own. Yet when it is blended with sweetness, the likability rises. People like “sweet and sour” more than just “sweet,” and the ratio is said to be when the added sourness is one-50th to one-100th of the weight of the sweetness (example in weight comparison of sugar and acetic acid).

43 select articles compiled into a book

The Gohan Lab articles have been compiled into a book.

It includes 43 recipes and arranged dishes such as fluffy shaomai made with grated pork and tofu as well as fair and crispy vinegared lotus root.

The book comes with a bonus that gives you access to view five videos of popular recipes including “spaghetti carbonara.” The book in Japanese and titled “Chorikagaku-de Motto Oishiku Teiban-ryori 1” (Staple dishes made tastier with cooking science 1) is in A4 size and has 100 pages. Priced at 980 yen including tax, it is available at bookstores and ASA (Asahi-Shimbun Service Anchor) delivery outlets nationwide.