CDP: Opposition alliance will win half of seats in Upper House poll 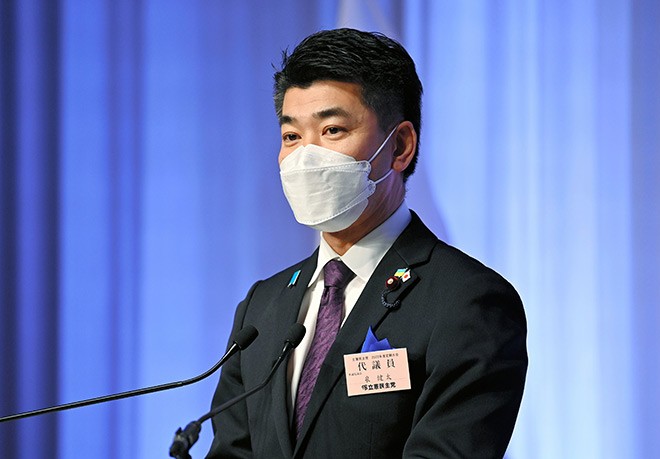 Kenta Izumi, leader of the Constitutional Democratic Party of Japan, speaks at the party’s convention in Tokyo on Feb. 27. (Yosuke Fukudome)

The Constitutional Democratic Party of Japan pledged to win at least half the seats up for grabs at this summer’s Upper House election with other opposition parties.

But the party has yet to pick candidates for more than half the electoral districts, even three months after Kenta Izumi became the CDP leader.

At its convention held in Tokyo on Feb. 27, the CDP reaffirmed that it will expand its traditional, progressive support base to include more middle-of-the-road voters.

The CDP also adopted an action plan that includes a goal of fielding an equal number of male and female candidates in the election.

“We are aiming for reforms that are kind to people instead of asking for self-responsibility in a society where they are forced to compete against each other or pushing for cold-hearted reforms that require wearing oneself out,” Izumi said at the convention. “We will remain committed to offering an alternative to the (ruling) Liberal Democratic Party.”

Izumi emphasized that his party is at the center of the opposition bloc that can take power away from the LDP.

His remarks were an apparent dig at the opposition Democratic Party for the People, which backed Prime Minister Fumio Kishida’s draft budget for fiscal 2022.

“To solve social issues that have been exacerbated because of the LDP’s long years of neglect, we keep offering another alternative: opposing a budget bill,” Izumi said. “That is what opposition parties seeking a change of power should do.”

Izumi said at a news conference after the convention that the CDP is pursuing a proper path to confront the ruling camp. But he also indicated that his party does not intend to exclude the DPP from an opposition alliance to unify candidates and consolidate opposition votes in the Upper House election.

Izumi pledged to change the CDP’s image of just criticizing, questioning and opposing what the ruling bloc does during the party’s leadership race, which took place after the CDP’s poor showing in the Lower House election last October.

After being elected CDP president, Izumi appointed an equal number of men and women to his party’s executive board, adopted a bottom-up approach in running the party, and promoted the CDP as a “policy-making party” in Diet debates.

Although he has been criticized as indecisive over the past three months, Izumi has shown signs of change following the DPP’s backing of the draft budget.

The CDP has sought cooperation with the DPP as a “brother party.”

But Izumi lashed out at the DPP for “making a huge mistake” on the draft budget.

When he met Tomoko Yoshino, chairwoman of Rengo (Japanese Trade Union Confederation), on Feb. 25, Izumi questioned her about her earlier remark that she could understand the DPP’s move.

Rengo, the CDP’s main support group, opposed the alliance between the party and the Japanese Communist Party in the Lower House election.

But Izumi said at the convention that opposition parties, including the JCP, will unify their candidates in the Upper House election, as he had confirmed in his meeting with Yoshino.

The party has not made any decisions for the Kanagawa district, where five seats are contested, and the Osaka district, where four seats are up for grabs, as well as the 24 other districts: Miyagi, Akita, Yamagata, Fukushima, Ibaraki, Tochigi, Gunma, Ishikawa, Fukui, Gifu, Shizuoka, Nara, Wakayama, Tottori and Shimane, Hiroshima, Yamaguchi, Tokushima and Kochi, Kagawa, Saga, Kumamoto, Oita, Miyazaki, Kagoshima, and Okinawa.

Shunichi Mizuoka, a veteran Diet member who chairs the CDP Caucus in the Upper House, expressed a sense of urgency at the end of the party convention, saying the summer election would be a battle for survival for the party.