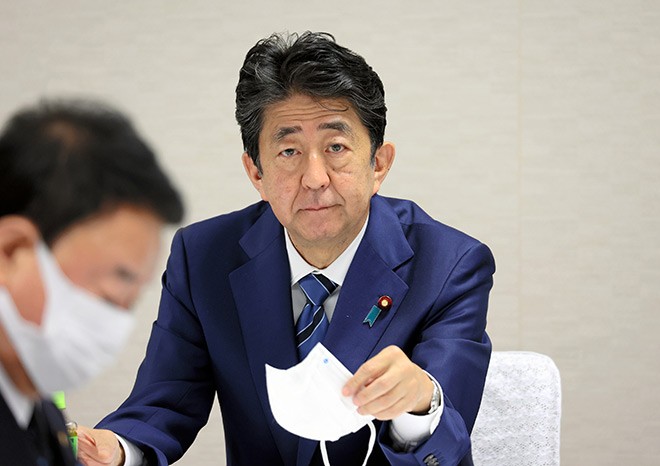 Former Prime Minister Shinzo Abe floated the idea of Japan “sharing” in the possession of nuclear weapons, as is practiced by some NATO members, a possibility flatly rejected by Prime Minister Fumio Kishida.

Abe expressed his belief on a TV program aired by Fuji Television Network Inc. on Feb. 27.

The former prime minister was discussing NATO’s nuclear deterrence concept with which multiple countries share nuclear capabilities, when debating the Russian invasion of Ukraine. Among NATO members, the United States has deployed nuclear weapons in certain countries in Europe for when they might need them.

“Although Japan is a signatory of the Treaty on the Non-Proliferation of Nuclear Weapons and has adopted the Three Non-Nuclear Principles, we should not regard a discussion on how the world’s security is maintained as taboo,” Abe said.

He said this when responding to a question from former Osaka city Mayor Toru Hashimoto.

In 2006, under the first Abe administration, Shoichi Nakagawa, then chairman of the ruling Liberal Democratic Party’s Policy Research Council, was severely criticized for saying that Japan could discuss possessing nuclear weapons for self-defense. He said it after North Korea conducted a nuclear test.

Abe also said people are talking about how Ukraine’s fate might have been different if the country had not given up its nuclear weapons in the 1990s.

Although he said that it is important to make progress toward achieving the goal of abolishing nuclear weapons, Abe also stressed, “We should discuss various options, as far as how defending this country (Japan) and its people is concerned.”

On Feb. 28, Kishida rejected the possibility at a meeting of the Upper House Budget Committee.

Kishida said nuclear sharing would mean that a country makes use of the U.S. nuclear deterrence capabilities for its own defense.

“Considering our country’s position to adhere to the Three Non-Nuclear Principles, we can’t accept (a discussion on nuclear sharing),” Kishida said.