VOX POPULI: The plummeting ruble is the price of Russia’s Ukraine invasion 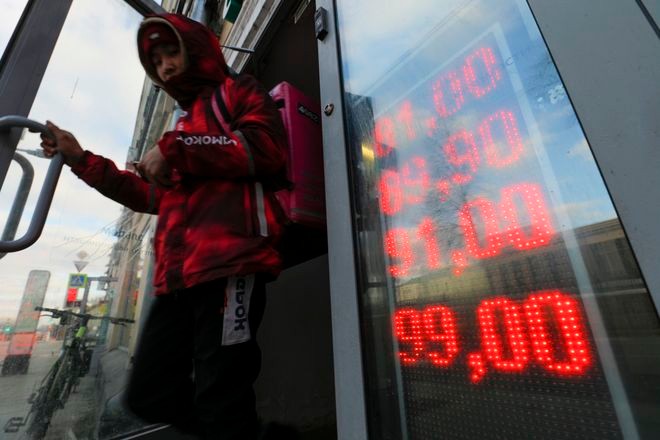 A food delivery worker leaves an exchange office where a screen shows the currency exchange rates of the U.S. dollar and the euro to Russian rubles in Moscow on Feb. 24. The ruble plunged to a record low of less than 1 U.S. cent in value on Feb. 28. (AP file photo)

"The best way to destroy the capitalist system is to debauch the currency," is an observation attributed to Vladimir Lenin (1870-1924).

The pronouncement was made famous by British economist John Maynard Keynes (1883-1946) who shared it in his book.

Keynes underscored the dreadfulness of a currency's massive depreciation.

What he had in mind was post-World War I Europe, where many citizens were reduced to poverty by protracted inflation while the social order crumbled.

But the Russian currency was also "debauched" in the early 1990s, just before and after the collapse of the Soviet Union. Amid the economic confusion, the ruble lost its value as a currency to the point of being replaced by foreign tobacco.

It was thanks to President Vladimir Putin that the nation could ride out the inflation and unemployment--or so it is apparently believed by not just a few Russians.

However, Putin's invasion of Ukraine may turn the clock back. The ruble is already plummeting, not to mention that the United States and European nations are slapping new financial sanctions on Russia.

Its hands and feet tied, so to speak, Russia's central bank is no longer able to intervene and shore up the ruble. The central bank has reluctantly raised its domestic interest rates, which is bound to cool off the economy.

With the Russian economy in turmoil, the rest of the world cannot remain unaffected. Crude oil and gas imports may well slow to a trickle.

Still, severe sanctions are necessary because people are being injured and killed in Ukraine.

Putin once said the collapse of the Soviet Union was "the greatest geopolitical catastrophe of the (20th) century."

By invading Ukraine, he may be hoping to recover some of the status his nation lost after the Cold War.

But he is wrong. For every person living in Russia, an economic crisis is a catastrophe in itself.